From YouTube to vlogging, let's dive into the technical side and basic aesthetics of video lenses with the camera.

Today's video is all about the best lenses for video that talk to the camera. Are you shooting with a wide or medium angle lens? With a cinema lens or a telephoto lens? What looks best and works best? And is there a right lens for this type of recording? Today we're going to cover the technical side of this issue as well as personal preferences. Watch the video and read the transcribed version that follows in the article below.

So let's start with the first and most common lens …

The ultra wide angle of the 16 mm forces the loudspeaker close to the lens.

Each focal length we're talking about has a different mood and taste, and a different association with each taste. However, let's start with the 16mm.

The 16mm lens is an ultra wide angle lens that is difficult to record in certain rooms. For example, if you are taking a photo in a location that doesn't look good, you will need to change the camera position and angle. And while it's one of the most widely used lenses for YouTube, it's sometimes a bit too wide, creating a dark angle that isn't common for videos talking to the camera.

When people are watching television or movies, they rarely use a wide angle for "talking to cameras" as it is not so flattering. And that means that everyone who speaks is really close to the lens. So if you're doing an interview or something with a client, 16mm might not be your friend. A slightly tighter shot – like a 35mm camera – may be a better choice, however.

Many of us have a microphone on top of the camera, so the camera is nice and close, and so is the microphone. However, this distorts the face. Things look kind of shaky and weird. The 16mm lens, while fine for recording, is not necessarily the most flattering lens, nor is it the most convenient lens either.

However, it creates an obscure effect. If you're filming in a small space, the wide angle allows you to capture more of that space. When you're filming in a cool looking room, it's quick, dirty, and great to get everything captured on. It's also a really good focal length to make sure you're in the picture. This is another reason why it is one of the most popular lenses. When you shoot ultra-wide, you are definitely in the picture. Hence, there is no need to constantly check the monitor knowing that this area is in the frame. The 16mm prevails here.

So if you want a bit of intimate, slightly obscure, vlog style taste, the 16mm is for you.

Now let's jump to the 35mm, which gives you a bit more of the cinematic convenience we're all used to. 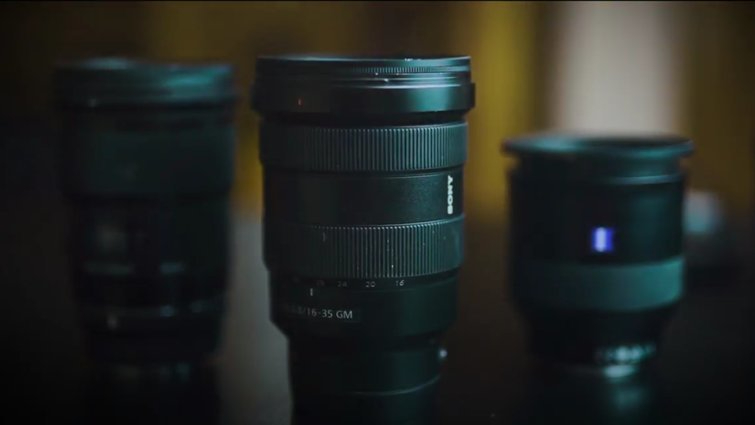 The focal length of 35 mm creates a comfortable distance between the subject and the audience.

In fact, I think this is probably one of the best focal points for the Talk to Camera YouTube format. The reason for this is simple. The camera is playing at a distance that is not too far away. It doesn't feel too representative. It doesn't feel too cinematic either what to do with the 50mm. With this the camera still has a bit of closeness. It actually feels like the same focal length that you would have if you talked to a person. You also get a nice distance.

So when you do YouTube or even an interview, the 35mm format makes for a more personal, realistic and enjoyable atmosphere. It's the perfect distance. However, when you're filming someone, that camera is still pretty close. For those who are a little less comfortable around the camera, you might want to move the camera a little further away. Personally, I feel that this distance gives me the feeling of actually speaking to a person. Even as an on-screen talent, there is some comfort in it. At this focal length, it's probably one of your best for YouTube and tutorials. It's a little more cinematic and you can bring it out with your 16-35mm lens too if that's an option. And while it's versatile, it doesn't look like my favorite.

Let's jump into my favorite Talk to Camera setup – the 50mm setup – which is much more cinematic. 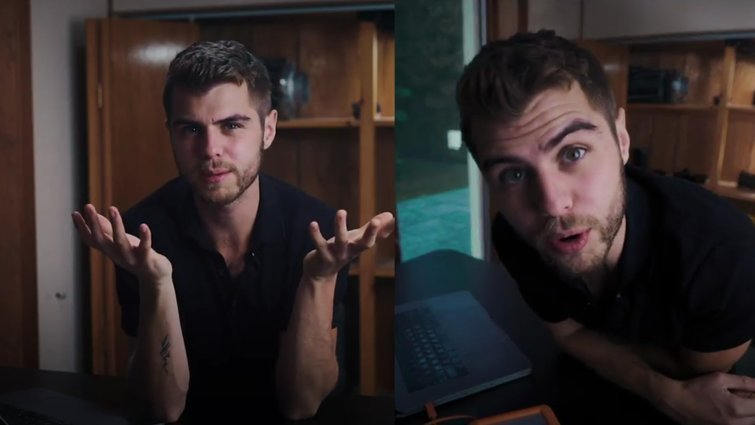 Check out the difference in sharpness in relation to the subject and background when using 50mm (left) versus 16mm (right).

If I ever make a film with a "talk to camera" sequence, I will shoot it on a 50mm format. It's most flattering to people on screen, but far enough away that people don't feel like the camera is in their face. And because the camera is so far away, you have to project more and speak louder, even with a lavalier on.

Technically, I like what it does to the background. It compresses the frame enough that it distorts you a little, but it fades into the background and makes it a lot richer.

The problem with the wide angle is that it showed almost too much. (I had to create some awkward pictures so you couldn't see my ugly basement.) And if you don't have a large background area in your set or in the YouTube studio that you've always wanted, shooting with a narrower lens can be yours help capture this small space.

Those who can afford the big sets will shoot on bigger, wider lenses. This also applies to the cinema. When I'm shooting an indie film and the position isn't optimal, I throw in 85mm or 50mm. The idea applies to “talking to cameras” in the background. I'll put this 50mm on top and immediately it looks stunning and I don't have to worry about disguising the entire background frame.

This is the best lens for cutting corners and actually just getting a nice, cinematic image. You don't get any weird distortion and it's one of the best looking lenses for capturing faces.

Now, for fun, let's throw in an 85mm lens and talk about how it feels and looks. 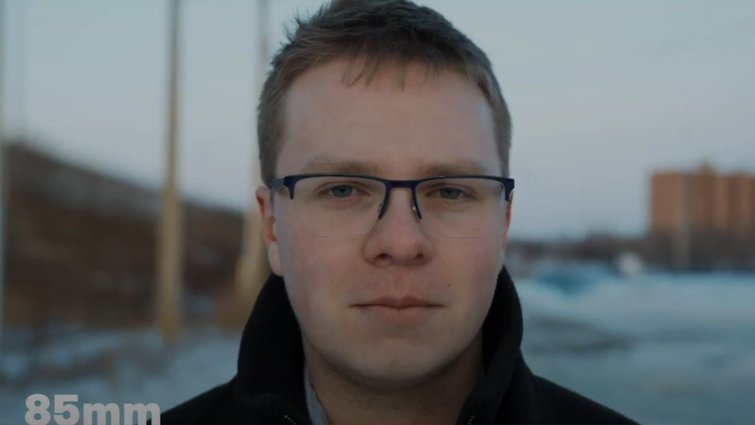 The 85mm is perfect for tight, detailed shots.

With the 85mm, it feels like yelling for someone to hear you. It's like the camera is on the opposite side of the room, which is why it's probably one of the worst focal lengths to film for YouTube and talk to the camera. First, the camera is extremely far away. Second, you need a super large room to film. Third, it feels like you're shooting on a telephoto lens.

The 85mm and telephoto lenses are perfect for filming behind-the-scenes moments and nature documentaries, and produce a really clear, beautiful image. However, for projects with the camera, this doesn't work well due to the distance, which creates an uncomfortable feeling between the person behind the camera and the viewer. The 85 mm format is intended to capture the details of a recording – hands moving, facial expressions, etc. However, this type of focal length is impractical for YouTube videos or vlog work.

From top to bottom, I'd say the 35mm format is best for capturing YouTube videos. It's not too close. It's not too wide. The 50mm are definitely the cleanest and richest shots. The 16mm format makes people feel like they are watching a YouTube video or a vlog, and it works well as a run-and-gun. But if you want to try to do something ridiculous, something that stands out from the crowd, then go for the 85mm format.

Thank you for subscribing. And whatever your lens of choice, have fun with it!

For more tips and tricks about filmmaking, see the articles below:

Disney Tentpoles Are Extra Essential for Theaters Than For Disney

Be taught Every little thing You Have to Know In regards...