Originally released on November 5, 2019. Scroll down to get news about the 1.6 update.

Adobe has released Photoshop for iPad, a new version of its imaging and digital painting software that has been “redesigned” for use on mobile devices.

The iOS app, which includes a number of Photoshop features customized for use on the touchscreen, is only available through subscriptions, either through Adobe's Creative Cloud plans or through in-app payments.

The release was announced on Adobe MAX 2019 along with After Effects 17.0, Character Animator 3.0, Dimension 3.0, Photoshop 21.0 and Premiere Pro 14.0, as well as the new iOS augmented reality authoring app Aero.

The "real" Photoshop, adapted for use on mobile devices
Photoshop for iPad was first announced at Adobe MAX last year and, unlike previous Adobe apps like Photoshop Express, is based on the same code base as the desktop edition of Photoshop.

It is intended to achieve results identical to those of the desktop edition and to exchange files either with standard export formats such as PSD, TIFF, JPG and PNG or with a new cloud document system.

However, it currently contains only a very limited subset of the Photoshop functions: According to Adobe, the first version focuses "on compositing, basic retouching and masking".

In addition to a number of core tools adapted for touchscreen workflows, version 1.0 includes a limited selection of selection functions and a layer stack with support for masks and blending modes.

Many important functions will be available in future updates
In the official Adobe user forum, the response to the initial release was pretty lukewarm. One poster described the feature set as "a big disappointment".

In particular, users have highlighted the lack of support for RAW images, curve adjustments, and the lack of an option to import custom brushes as stumbling blocks for serious work.

In his blog post, Adobe describes version 1.0 as "the beginning" and says that "we'll add more features and workflows as we learn more about how customers use Photoshop on a mobile device."

"We know we have more to do and we encourage you to tell us what's important to you after trying the product," the company said.

Unlike its main competitors, Photoshop for iPad is also a subscription product.

However, we expect the majority of early users to effectively get the app for free, since Photoshop for iPad also includes subscriptions to the desktop software.

Other news: Fresco now available for Windows tablets, Illustrator for iPad next year
In related news, Adobe Illustrator announced for iPad: an equivalent app for vector design work that "reinterpreted" the desktop application for use on a mobile device.

The company has also released Fresco 1.1, an update to its new professional digital painting tool for mobile devices that makes the app available on both Windows and iOS.

The update also adds the new AI-controlled automated object selection system that was introduced in the desktop edition of the software in Photoshop 21.0 last year.

Since our original story, Adobe has also published a blog post that lists other features that will be available for Photoshop for iPad in 2020, including curve fitting.

Updated April 22, 2020: Adobe has released Photoshop for iPad 1.3. The update adds a new function: the automatic activation of missing fonts in documents, provided they are available in the Adobe Fonts library.

Users who buy Photoshop for iPad through in-app purchases in the App Store now also get Fresco and vice versa. Both apps were already available as part of subscriptions to the Photoshop desktop edition. 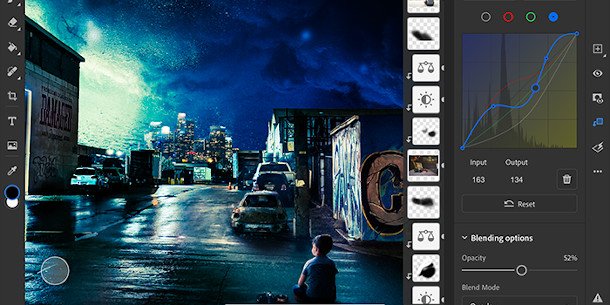 This time there are two additions, one of which fixes one of the most important omissions in the original version: It is now possible to use one of the standard adjustments for Photoshop curves for images.

Apple Pencil users can adjust the pressure sensitivity of the pen.

Updated June 16, 2020: Adobe has released Photoshop for iPad 1.5. The update adds a new feature: the option to send images to Lightroom with a new command using Lightroom.

The update makes it possible to refine the edge of a selection similar to the desktop edition and thus create more precise sections of semi-transparent objects such as hair.

Pricing and system requirements
Photoshop for iPad itself is available for iOS 13.1+. You can try it for free, but you'll need to make in-app purchases of $ 9.99 / month to continue using it if you don't have another qualified subscription.

Greenscreen.blog - November 27, 2020
0
When someone talks about virtual private networks (VPNs) and games, it is almost always assumed that the person is talking in the context...

Greenscreen.blog - November 27, 2020
0
La Strada One of the most interesting periods in the history of Italian cinema is the era of international co-productions that followed neorealism. The...

WATCH: Unique ‘Sonic the Hedgehog’ Behind the Scenes Clip