Cinematographer Michael Pessah talks about the lighting, camera, and overall planning it took to film an outdoor beach night.

Smiley Face Killers is a memoir in dark horror about a troubled college student whose life sinks deeper into paranoia as he becomes the target of a mysterious serial killer.

The beachfront landscape in Santa Cruz, California is a big part of the action. It's the most iconic place in Southern California, and much of what writer Bret Easton Ellis, director Tim Hunter, and cinematographer Michael Pessah wanted to do in the film was slowly turn a Cali daydream into its worst nightmare.

For a central scene on the beach, the vision was to go back to classic California beach films like Point Break or even Gidget and then pull the carpet out from under the things. That meant overcoming a tough, physical challenge – shooting a beach outside at night.

Let's hear what cinematographer Michael Pessah, ASC, had to say about the overall planning it took to film an outdoor beach night.

The shooting of Smiley Face Killers. Image by Melanie Pullen.

Illuminating the beach at night is one of the hardest things in cinematography. That's why many films like Jaws (Chrissie's death), Cast Away (the dramatic rowing sequence) and Down Periscope (nightly ocean sequences with submarines) shot their ocean scenes day after night.

There are many reasons for that. The water is very difficult to see at night – it's big and dark. It is not easy to bring equipment and electricity to the beach. Plus, there aren't a lot of trees or structures to mask lights and equipment. How did Hunter and Pessah deal with it? 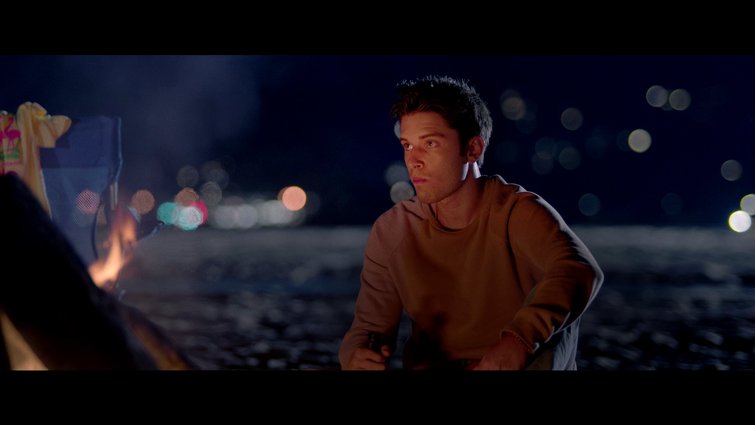 With the help of the VFX department, real campfires were used to light up the beach at night. Image by Melanie Pullen.

One of my solutions was to use a Beebee Nightlights truck on the beach. This allowed us to roll our lights straight onto the beach and adjust our moonlight without having to run a lot of power cables through the sand. We gelled the beebee with 1/2 CTS so that it doesn't turn too blue against the fire. We really wanted to use real fires for the campfires on the beach (it just looks better than if you fake it with a light) so our VFX department had adjustable spigots on the fires so we could set the intensity for wide angle shots and at different levels can adjust close-ups. I designed the lighting to match the levels of the campfires. It is easier to adjust a light than to change the brightness of the fire so that we get a nice, rich orange. I exposed the fire at about two stops above the key. 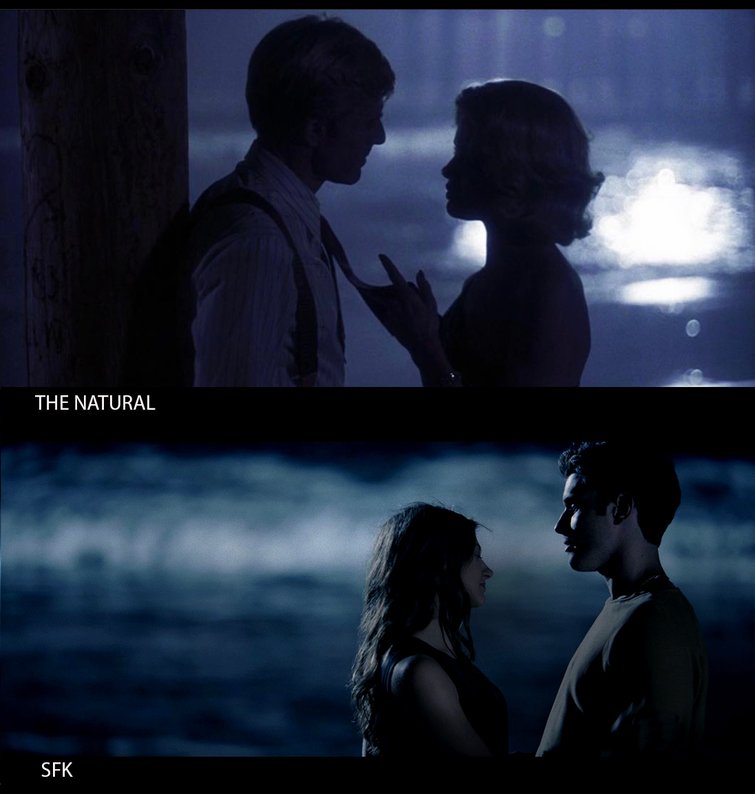 The love scene on the beach pays homage to a similar scene in The Natural. Image via TriStar Pictures via Sony Pictures or Lionsgate Home Entertainment.

For the love scene on the beach, I honored one of my favorite scenes, the beach love scene in The Natural, in which Robert Redford plays in silhouette against the water. Caleb Deschanel, ASC, does a great job of illuminating the water there, and I wanted to try something similar. It's really pretty magical to see the waves play behind you.

To give the water a backlight to silhouette our stars during their romantic stroll, I placed small HMIs with a 6500 putt-putt generator. It's always great to have a small generator and a 2.5 or 1.8 on hand so that you can easily place it in specific spots without running a lot of cables. This is also very helpful when you are filming in the forest and need to put a light in a deep background.

Pessah took inspiration from the script and used key props to provide a natural source of light. 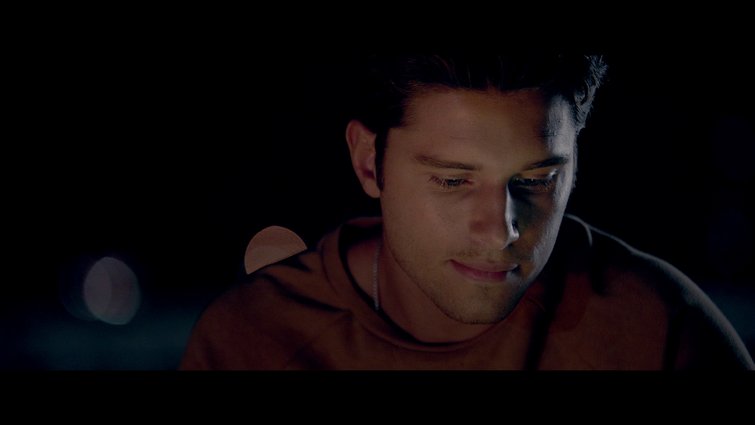 Cell phones were used as the actual light sources throughout the film. Image by Melanie Pullen.

I wanted a light source that went beyond the moonlight and the ability to slide the color wheel in opposite directions – the team came up with the idea of ​​bringing campfires across the beach as a visual element. Cell phones play a big part in the movie, and we only used them as the actual light sources in the scene. It took some work to get the color and brightness right, but they worked very well with the fire and backlight.

After doing our first pass with our AD, I knew that bringing in a beebee truck was the most efficient way to get our moonlight in. It was a scene that was shot over several nights, and we would have lost a lot of time if we had dragged heavy cable through the sand and then wrapped it up every morning. . . only to repeat again a few hours later.

I explained this to production and they immediately agreed that this was the way to go. The truck could just roll up and we had light very quickly and it was very easy to position when the angles changed.

We also saw where the sun rose in the morning on the boy scout. We made sure we didn't point in that direction at the end of the night so that we still had a few minutes to shoot. We also determined which way the twinkling lights of Los Angeles would be visible in the background. We tried to block the scenes, so the main close-ups were pointing in that direction. 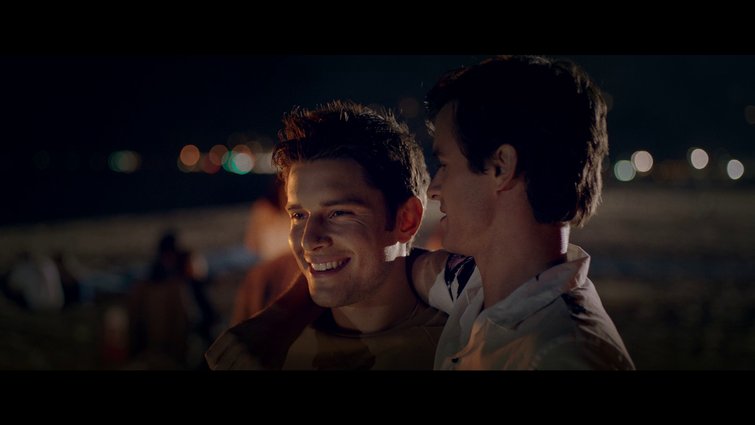 The lighting in this scene brings out the twinkling lights of the beach in the background. Image by Melanie Pullen.

Pessah provided a wonderful perspective on his approach to planning the lighting. Much like when artists focus on negative space (the space around and between subjects), he knew there would be basics that you couldn't control, and you'd want to adjust your lighting levels around those elements. In this case, it shone so far that the twinkling lights and fires on the beach looked best.

We only had one big lighting car so some of the angles were cheated, leaving the actors in the background in both directions. They were long lenses and there isn't a lot of geography to reveal them. It is very helpful for filmmakers to remember that with a long lens you often only need to pan the camera a little and it looks like you've rotated the axis completely 180 degrees. As long as you can keep an eye on your eye lines, this is a lot faster than moving a large backlight to the other side of the set.

Of course, if you have the resources to keep two large sources on opposite sides of the night exterior and toggle between the two as you rotate your camera, that's even better. But we didn't have the budget for it and this solution worked great. 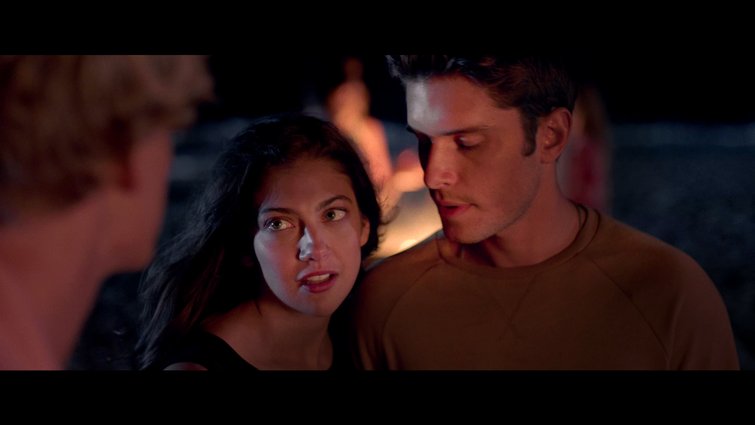 Part of budgeting is knowing where the edit is and taking the time to determine which settings are best to use.

Sometimes we would film our close-ups first and then withdraw for the wide-angle shots. There's a convention that you always have to start with the wides, but often the scene lives in close-ups and it's nice to give them the time they need and then work your way backwards.

Another factor to consider when shooting outdoors and near water is how the physical elements affect the filming.

Steadicam on the beach can be difficult because of the wind. Our handles often had to hold a 4 × 4 double net next to Twojay to prevent the wind from affecting the composition. There are a few steadicam shots on the beach that we took with a 75mm lens and they are absolutely solid.

With all the practical considerations, history still counts.

Overall, we planned the color arc of the scene in such a way that it changes from warm to cold to warm. It's really great to be able to shift the hue while moving the camera or during a long scene. It helps accentuate movements and gives weight to the characters' journey.

If this interview gives you more practical tips on filming on the beach, check out this informative Shutterstock tutorial for the best way to catch the sun and surf the movie.

For more cinematic tips, tricks, and interviews, see the articles below:

Purchase Stills From Your Favourite Cinematographers and Administrators to Profit COVID-19...