TLDR; A short film I wrote for DP plays tons of festivals and you can see it streaming this Friday!

The call to action

In 2017, my buddy Mark Andrews asked if I would be his cameraman for a short film. Mark and I went to CalArts together and made films together for most of our lives. Most recently, we worked on Brick & Steel, a fake trailer slash birthday present for another CalArts friend of ours.

After a fruitful career in traditional animation, Mark had been Head of Story and Director at Pixar for years. He had won an Oscar for co-directing Brave with Brenda Chapman. He was also Andrew Stanton's second director on John Carter and wanted to direct a live action short film to show his range of actors and stunts. So a slightly grown-up version of the films we've been making since school.

I don't really consider myself a cameraman. I love shooting and sometimes enjoy doing my own job on DP, but the responsibility for Mark's solo live-action directorial debut seemed too much.

At that point we were standing in my studio. Mark looked around and asked, "So what is all this gear for?"

Setting up a VFX shot under a tree.

We shot in the foothills of the Sierra Nevadas in Northern California. It was a well-run nine day shoot, three of which were pure fights and stunts overseen by Allen Jo and Wayne Daglish who also skillfully operated a second camera. Eric Staudenmaier, whom I already mentioned here, was our drone operator. I had to train a lot of equipment on this shoot, including the StuCrane.

We shot on the Sony a7SII with exactly the settings you all warned about: sLog-3, s-Gammut3, and recorded those crispy 8-bit files directly onto camera cards.

Using Supercomp to add muzzle flashes and smoke. Thanks to the interactive effects of Supercomp, the smoke is automatically backlit by the flashes.

If you've seen my public appearances since then, Circle of Stone has found its way into some of my work. I used it in the first public demonstration of Supercomp and it's my tutorial for King Pin Tracker. At IBC 2019 I took two recordings on the Adobe stage. 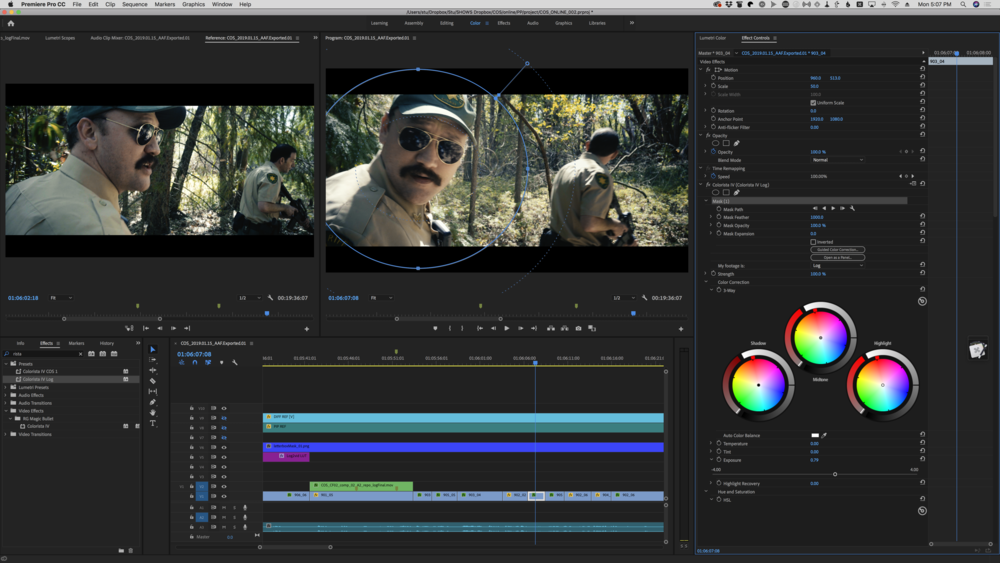 I'll say more about how we posted this movie, but now let's get to the point:

Circle of Stone has been included in many film festivals and has even won several awards. Film festivals, like all of us, are trying to find their place in a pandemic. I love this photo from our movie set in a parking lot in Portland.

As I was the case with NAB and SIGGRAPH, the loss of a personal event can create an opportunity for an experience more people can share. Case in point: the Sin City Horror Fest, which is streamed online. Circle of Stone is part of Shorts Block 5, which will be shown this Friday evening (October 23rd). I wish you could see it on the big screen, but it's pretty good that you can see it at all.

Details about the Sin City Horror Fest Stream can be found here.

The best way to keep an eye on what COS is doing is to follow @juniperroadfilms on Instagram.