Foundry has introduced Katana 4.0, a major update to the toolset for developing lighting and optics.

Major changes include a new, artist-focused lighting mode inspired by traditional cinematography, as well as support for multiple simultaneous renderings and interactive network renderings within the software.

The features were announced last month as part of the company's Foundry live streams during the normally Siggraph 2020 week. More details will be announced before Katana 4.0 ships this fall.

As with Solaris, the new layout and look development system introduced in Houdini 18, users can choose where lights or shadows should fall in a scene by directly picking points on the geometry.

Katana then creates a light in the scene with corresponding properties.

Users can also place lights based on the current camera position, for example to create fill lights.

Once created, lights can be adjusted via their viewport manipulators, which have been redesigned to make them more artist-friendly, or via a floating spreadsheet user interface.

The new mode works with the native light types of all renderers supported by Katana: 3Delight, Arnold, RenderMan, V-Ray and from version 4.0 Redshift.

According to Foundry, the new lighting mode is “not designed as an all-or-nothing workflow” and can be used in conjunction with Katana's GafferThree nodes.

The GafferThree node itself has not received any significant changes under the hood in Katana 4.0, although Foundry says it plans improvements to its user interface to speed up the workflow. 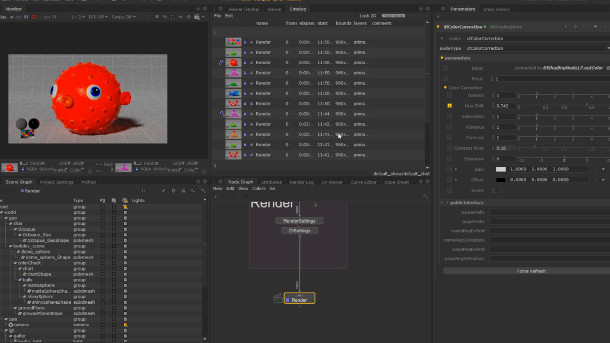 The support of multiple simultaneous renderings speeds up look development
Another major change in Katana 4.0 is support for multiple concurrent renders, so users can start new test renders – or entire sets of renders – on their local computer without having to wait for existing renders to complete.

The functionality is intended to accelerate the testing of material variants and lighting for a scene. or testing lighting and camera changes in a sequence.

The foundry describes it as useful for "anything that needs multiple angles of feedback".

This includes wedging: Katana 4.0 comes with a sample script that automatically renders variations of a scene with different value permutations for key parameters.

The live stream showed that variant renderings are compared with conventional A / B cloths. However, according to Foundry, a contact sheet-style user interface similar to the one in 3Delight is also being worked towards and should be released next year. 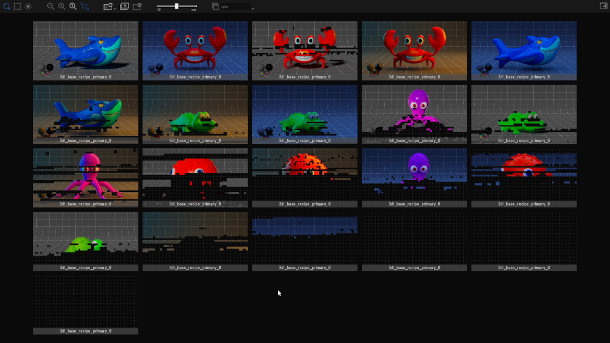 Instead of waiting for an entire frame to complete and then importing the rendered image, the rendered pixels are streamed back to katana as it is generated.

If changes made to a scene do not seem to be working, users can cancel the ongoing rendering and start new ones, reducing iteration times for a shot.

The functionality should be compatible with standard render farm management software such as Deadline, OpenCue, Qube! Be Compatible. and Royal Render about extensions to the Katana API.

"We're multiplying the work you can do as an artist," said Product Foundry Director Jordan Thistlewood. "Getting a few more render farm licenses is cheaper than hiring another artist."

Updates to the Hydra viewer and USD support
Other changes in Katana 4.0 include updates to the software's Hydra Viewer that allow direct interaction with the render ID buffer.

Instead of waiting for an entire scene to load before starting work, users can start with an image from a previous work session and then make selections to determine which geometry Katana loads.

According to the Foundry, this works with "all standard selection techniques," including dragging tents or using modifiers to expand a selection. and can "drive any of the internals in katana".

Foundry also plans to support VDB volumes in the Hydra viewer, although this is described as a "stretch target" for version 4.0.

The company announces that it will announce further updates to the viewer and Katana's support for the USD scene description format closer to the release date.

Pricing and system requirements
Katana 4.0 should be released in autumn 2020.

The current stable version, Katana 3.6, is available for Windows 7+ and CentOS / RHEL 6 Linux. An interactive license costs $ 9,458, including a 3Delight rendering license. Additional rendering licenses will be charged on request.

How would I make this Shader?