Forget the zoom reunions. The very best story to capture the essence of this difficult year was made before it began.

It has become a cliché to think about how much everything has changed in 2020, but the practical effects of the pandemic only tell a partial story. This year has changed everything about the way we process the world and look at its weakness. Storytelling was no exception. Most of the movies and TV shows looked like instant pieces. Zoom became a tricky template for everything from reunion episodes to found footage horror films. But the best drama to capture the essence of this troubled year was done before it began.

In "Nomadland", Frances McDormand's Fern roams the empty prospects of a world that is marked by dislocations. The widow drives through rocky landscapes from Nevada to California and to many desolate places in between, avoiding the loneliness of growing old in rural America by reinventing her relationship with it. After losing her husband years ago, Fern initially stayed in the abandoned ghost town where they built their life and found the memories that haunted her to become a burden. Along the way, at the mercy of a wandering lifestyle, she discovers a measure of salvation. "I'm homeless," she says to an unbeliever. “Not homeless. There is a difference. "

Fern's story is simple, but Zhao and cinematographer Joshua James Richards give many scenes the deep, unspoken awakening at the root of their journey, with each huge outdoor image adding a new dimension to the growing tapestry. By living hand to mouth, swapping a sandwich for a beer, and hanging out by the desert fire with other nomads, Fern achieves a deep connection with a society that contradicts the expectations of his most pampered dreamers.

By some standards, Fern's choices are ruthless, self-destructive, and hurtful to those who care about her well-being – from the judgmental relatives she shakes off to the kind suitor (David Strathairn) whose advances she rejects. However, since Zhao positions the narrative from Fern's perspective, her own value system can prevail. The film thus opens a fascinating window into the psychological hurdles of 2020.

When the pandemic hit, the notion of the American dream was overridden by nightly fears of the collapse of even the slightest social comfort. In this regard, Fern's instincts coincide with the moment: when comforts are scarce, the pursuit of happiness becomes an internal one. In one of the most powerful moments in the film, Nomadland features a monologue by the real-life nomad Swankie, a cancer dying woman, who explains why her life was fulfilled simply because of the poignant memories of the natural world she saw from her kayak hat: pelicans hovered overhead in Colorado, a family of moose gathered near a river in Idaho, a small army of swallows swarmed around them and reflected in the waves. Zhao trusts the authenticity of these memories so well that the camera simply sits with Swankie's face as "Nomadland" becomes one with her journey through life. 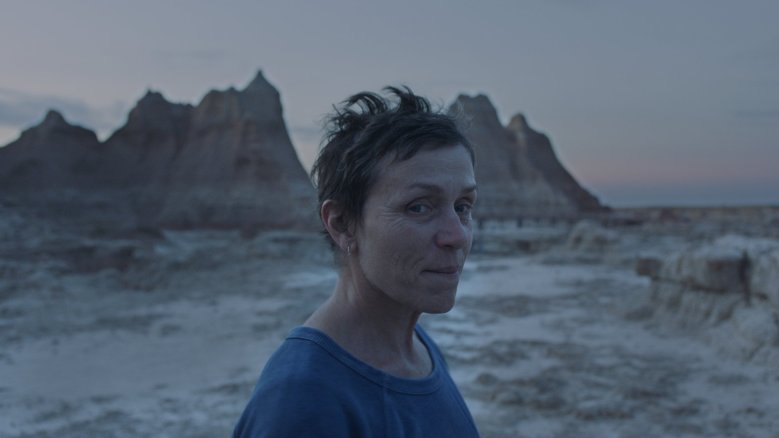 How many of us, sitting at home pondering the joys of a passing life, can relate to Swankie's heartbreaking time travel? Not everyone has experienced the wonders of nature in such majestic proportions. But few have lived through the past year without a sense of loss, big or small, and many of us have found comfort in remembering how it used to be.

As for Fern, their journey only began when “Nomad Land” came to an end. But while Zhao's Oscar-worthy storytelling doesn't get the same payoff as it did in "The Rider," with his native cowboy heading a new direction in life, the new film delivers a nifty set of implications. Fern's story ends with an ambiguity that celebrates the open possibilities of a liberated existence. It's a bittersweet recap of what it means to move forward, surrounded by a complex jumble of emotions but not tied to their onslaught. "I just don't want to feel good anymore," she once said. It's an educational line: Fern is the great film heroine that this year's moviegoers never knew she was needed.

Of course, most will only have the opportunity to experience this journey when “Nomadland” expands its release in 2021 and makes it onto digital platforms. Fortunately, many of the most memorable cinematic achievements of 2020 offer similar wisdom about these bizarre, alienating times. Kelly Reichardt's "First Cow" unfolds in an empty Oregon Territory landscape in the late 19th century, where two men from very different cultures find solace in camaraderie and wish each other to map out an uncertain world. Likewise, the young protagonists of "Never Seldom Sometimes Always", who fight their way through the hostile streets of New York in search of an abortion, illustrate the power of resilience in the midst of a hopeless island society. Charlie Kaufman's "I Think About the End of Things" delves deeply into the difficulties of getting lost in a troubled mind, and reflects on the dangers of solipsism and the effects of rethinking one's own tragic state. And of course there was no story that was more directly connected to the serious comic madness of 2020 than “Borat: Subsequent Movie Film”.

But when it comes to the cinematic experience that is most closely related to the current mood, “Nomadland” is the top priority. It wasn't planned that way, of course, but next to nothing this year. Intentionally or intentionally, "Nomadland" reflected the essence of 2020, and it's no surprise the performance comes from a filmmaker whose work revolves around the pursuit of personal satisfaction on the edge of American life. "Nomadland" doesn't exactly make the case that everyone would be better off living in an RV. But it's a vivacious salute to catharsis for moving forward at all costs. That's an inspiring idea in 2020, and a particularly welcome one when we finally escape its clutches.

Again to One, Episode 112: Tom Pelphrey