iFootage has just released its long awaited product, the Shark Slider Nano. The slider was introduced during NAB 2019 and since then iFootage has worked hard to refine the product and introduce something that can be beneficial for many during their productions.

The iFootage Shark Slider Nano – a compact motorized slider that is ideal for DSLR / mirrorless cameras and smartphones – is now here, and thanks to the company that sent us an early sample, I was able to "play" with it a bit. Originally, I wanted to do a video review of this new and anticipated device but decided to put it on hold as the product isn't quite there yet, at least for me.

This would be a typical scenario for using this type of motorized head slider: a broadcaster / production company or whoever wants to shoot an interview, and if possible with 2 cameras but on a budget. In the past, placing a single camera might have done the trick, especially when time is of the essence, and then the call to get more creative and include a second camera when interviewing one person has slowly and surely become popular. Lately things have moved back on and things have started moving around our screens, which is legitimate of course, but sometimes not really justified. With the advent of small mirrorless cameras (and cell phones) capable of capturing high quality video alongside affordable portable sliders, it was only a matter of time before these were used in such shooting scenarios. So far, the most common practice has been to slide from point A to B and either point the camera point in one direction, which means that the object is not really "locked" (which in our interview example would be the face). or have an additional component like a motorized head attached to the slider and make it more versatile. The result is a much more interesting movement that can be manipulated in many ways. 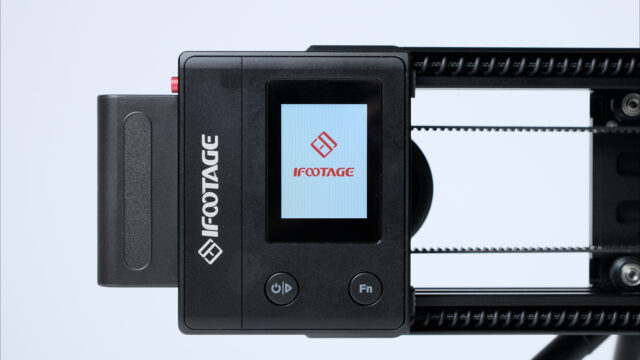 Now iFootage comes and integrates that motorized head into its slider, making it one unified, single and affordable product. Mind you, this solution only allows for two-axis movement (no tilting), but in all fairness this could satisfy many. And back to our example for an interview scenario: With the iFootage Shark Nano Slider it is now possible to lock the position "Point A" for a topic (in our case the face of the respondent), set the slider to "Point B ”to move and lock back on the face. The result is a sliding shot that keeps the face in the center of attention. Needless to say, this type of solution is a breeze as you can now operate 2 cameras in an interview, one of which slides until the battery runs out (or the interview ends, whichever comes first …). 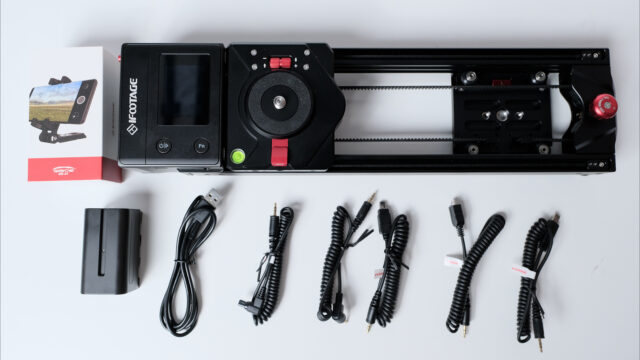 The slider contains everything you need to get started with it right away. It has a nice, small travel bag, a Sony NP-F battery (7.4 V, 4400 mAh, 32.5 Wh), various remote camera connection cables to support the time-lapse mode, a USB-C charging cable and a versatile mobile phone holder. I applaud iFootage for including everything in this package as it really helps Not You have to look for different components and cables when going out and taking photos. 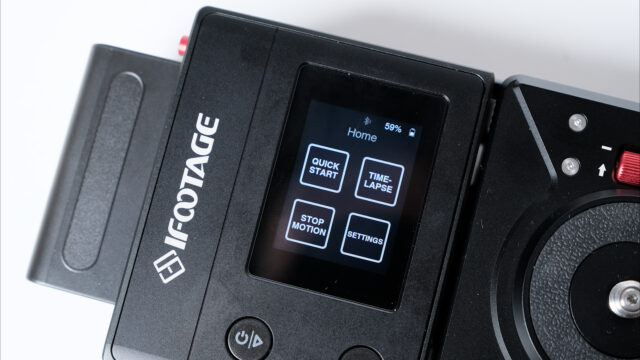 My observations are based on the firmware that came with it. iFootage was kind enough to let me know that many of the concerns I have in this review will be addressed in the next firmware update. Please see her official answer below.

Unfortunately, the slider falls too short here. Let me calcify first. The pushing itself and the built-in motorized head work very well! So the end result is fine. It is also a very flexible device that can be used to perform “normal” gliding, time-lapse, and stop motion. So, if the concept is great and the potential for a winning product is absolutely there, then you may wonder what is wrong. Personally, I was a little disappointed when I found out that the product is actually "semi-hedged". This also led me not to do a video review just yet, but to wait and see if some of the issues found can be fixed with the next firmware update. I know firsthand that iFootage is very responsive and takes user feedback into account. So, around the world, I have every reason to believe that sooner or later we will see a much more refined and mature product. But for now, here are a few things I would like to see changed: 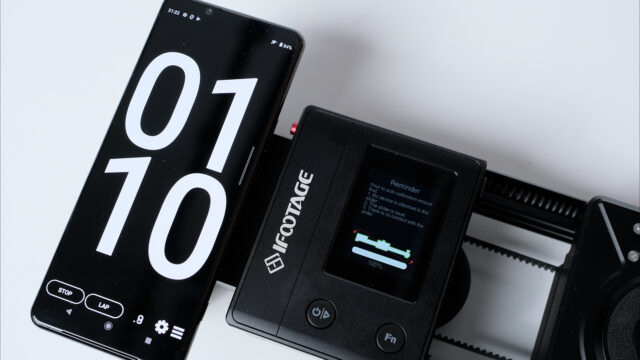 Start time: Right now you're standing at 70 seconds (!) And not only that. You have to calibrate the slider every time you turn it on (and wait 70 seconds). IFootage is currently exploring the possibility of offering a "bypass" alternative where the slider calibration is not performed every time it is turned on.

Start time: Answer from iFootage: We have updated the firmware based on feedback. As of now, users can skip calibration if they wish, and we've reduced the startup time to under 20 seconds. This firmware is already installed on the end product.

Slow startup: In general, the IPS screen works very well However, sometimes there is a long delay after points A and B have been set up and you want to click “Start”. Then the screen stops responding. I can only guess that the slider is doing its own calculations and therefore does not allow the movement to take place immediately when you click on the “Start” button on the LCD screen.

Slow startup: Response from iFootage: Based on the feedback, we are working to optimize the software to reduce the possibility of unwanted errors and we will continue to improve the user experience.

Adjusting the floating points "A" and "B": Probably not a big problem, but you'll read the slider's manual to learn how to do it, or check out the sticker that came with it before it goes away forever. In any case, let yourself be saved some time: Press both buttons (On / Off / Play and Fn) at the same time to start the process.

Adjusting the slide point A and B: Answer from iFootage: We have created brief instructions for operating the nano slide control and will publish them. We will also improve the touchscreen and app to incorporate more visual prompts. Detailed tutorials follow. https://youtu.be/FwiE6BxM9JA https://youtu.be/qklWz1Tltl4 https://youtu.be/OoboWz_OHOM 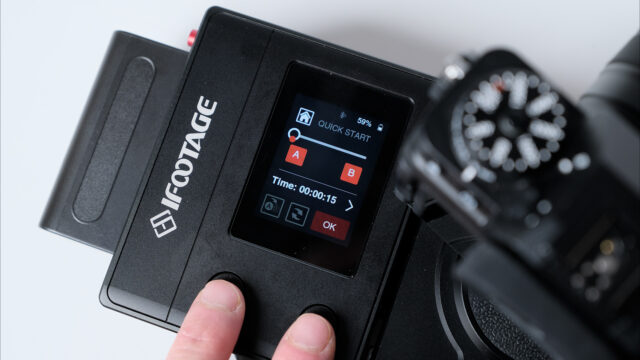 App does not connect to the slider: As with most modern sliders, iFootage offers a free app download so that the slider and its functionality can be controlled via the smartphone. Somehow I was out of luck seeing the app on my old iPhone 5SE (has a blank page) so I tried the same thing on an Android device (latest edition). This worked, but I've seen the phone look for the slider many times. So it looks like the Bluetooth connection between the two devices is not strong enough.

App does not connect to the slider: Answer from iFootage: Our team has tested devices for iPhone 5, iPhone SE, 7 and higher. We are working on the optimization for older iOS models. As long as the iOS system is 9.3 or higher, it should be fully functional. 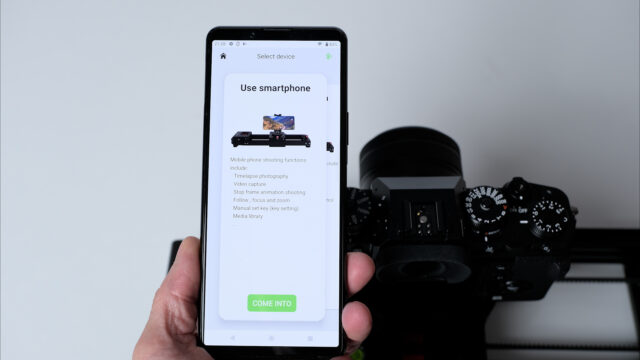 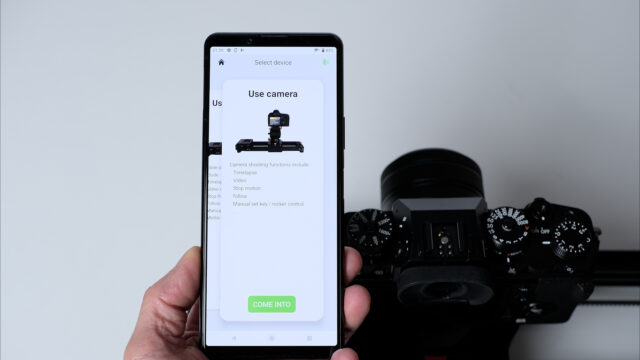 Open the app page not be intuitive: When I first opened the app on my phone, it showed me that I can use the phone as a camera (with iFootage's special movie interface). What I couldn't figure out on my own was how to control the slider with a mirrorless camera attached to it. iFootage was kind enough to let me know all you have to do is touch the screen and go to the next page. I hope that iFootage can consider redesigning the welcome page and then offering the option to choose which device to work with.

Total weight of the device: This goes without saying, of course, and cannot be changed in any way, but it is worth noting that I was extremely surprised at how relatively heavy the slider is. I note here like if you are planning to travel something and take this slider with you, you may have to consider whether you actually want to bring it with you. This can be determined by the nature of your work and the type of travel you choose. For example, if I'm flying (and need all of my gear with me in my pocket), I might consider the Smartta SliderMini 2. I'm comparing apples to oranges here, but for basic sliding of the camera, they're much smaller. lighter device could do. 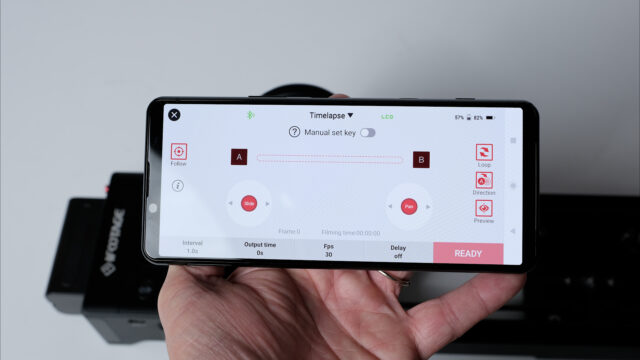 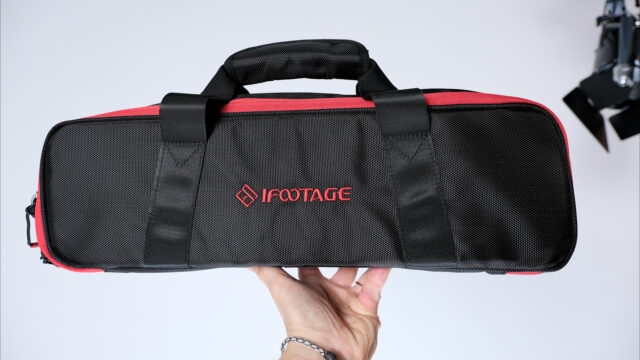 The iFootage Shark Slider Nano can now be pre-ordered from iFootage (USA and Europe). Shipping is scheduled for January 2021. For a 10% discount, please use CINED as the code when checking out. The discount is valid until January 1st. 2021.

You can choose between:

The concept and idea of ​​a compact slider with a built-in motorized head is really great, and I appreciate the time it took iFootage to get it to market. As mentioned above, the actual movement is very fluid and I wouldn't hesitate to use the slider in different shooting scenarios, especially when more sophisticated movement is required. On the other hand, it should be clear that this slider is not intended for Run & Gun duties (at least for me). The product weight and long startup time could be the obstacles here. I'm really excited to see what kind of firmware updates and enhancements the company can develop. When this update is available, I will be happy to put the device through its paces.

Are you the one who has been waiting to see what iFootage will come up with? Do you find this new Shark Slider Nano interesting? Please let us know your thoughts in the comments section below.

We Turned Our Improv Set right into a Comedy Webseries in...