Originally published July 15, 2020. Scroll down for final pricing for the P620 and Threadripper Pro CPUs.

The system that sits between the P720 and P920 at the higher end of the ThinkStation P-Series, Lenovo's professional workstation line, is initially the only way to purchase AMD's new Threadripper Pro CPUs.

The four new CPUs – Threadripper Pro 3995WX, 3975WX, 3955WX and 3945WX – offer the high number of cores of their consumer counterparts and are being marketed against two Intel Xeon systems.

Lenovo is also introducing the ThinkStation P620 as the "first PCIe Gen 4 workstation" aimed at graphics and engineering professionals, expected to ship in September 2020 with a base MSRP of $ 4,599.

The new CPUs offer companies interested in building very powerful workstations an alternative to server CPUs, such as the EPYC product line from AMD.

In addition to supporting PCIe 4.0 – more on that later – they provide network monitoring and security features not available in existing Threadripper chips, including standard storage encryption.

You can see their key specifications in the table above: To further analyze the processors and their position in the market, AnandTech has a good overview.

Initially only available via the ThinkStation P620
In contrast to their "consumer" colleagues, the 3rd generation Threadripper CPUs from AMD, the Threadripper Pros are not sold directly, but are only available through system manufacturers such as Lenovo.

While Lenovo has a limited exclusivity period, AMD says it is unlikely that future workstations from competing manufacturers will offer significant new features.

At the Lenovo press conference, Andy Parma, head of the AMD segment, stated that "there is no need to wait for future product offerings" for anyone looking to use the Threadripper Pro CPUs in production. 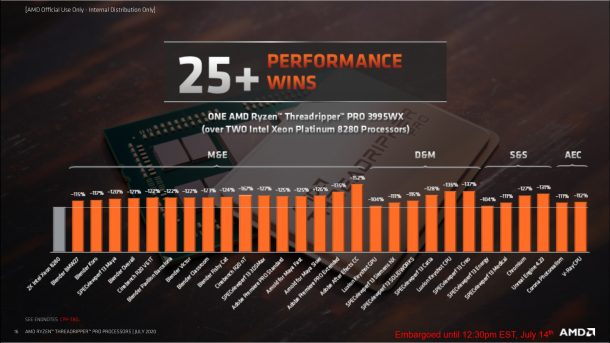 AMD's benchmark results show the performance of the new Threadripper Pro 3995WX compared to two Intel Xeon Platinum 8280 CPUs in DCC apps such as Blender, Maya and UE4. Click the image to view it in full size.

In addition to Blender and Maya, this also includes the CPU engines of renderers such as Arnold, Corona Renderer, KeyShot and V-Ray as well as other important DCC tools such as After Effects and Premiere Pro.

Other ThinkStation P620 specifications: PCIe 4.0 support and up to two Nvidia Quadro RTX 8000 GPUs
Another selling point for the ThinkStation P620 is its support for PCIe Gen 4. The system has six PCIe 4.0 slots: four full-length x16 slots and four x8 slots.

PCIe 4.0 offers higher data throughput between the motherboard and connected devices such as GPUs and SSDs than the PCIe 3.0 slots that are currently standard in professional workstations.

The other specifications are more conventional for a high-end system: up to 1 TB DDR4 RAM at 3,200 MHz; up to 20 TB of storage, distributed across up to six drives; and up to two Nvidia Quadro RTX 8000 GPUs.

Pricing and system requirements
As you'd expect from a system primarily geared towards larger studios, you need deep pockets to buy one: even the base configuration with an AMD Threadripper Pro 3945WX CPU, 16GB of RAM, a 256GB M.2 SSD and a single Nvidia Quadro P620 GPU has an MSRP of $ 4,599.

The Threadripper Pro 3995WX, 3975WX, 3955WX and 3945WX CPUs from AMD are only available through OEMs: initially only through Lenovo. AMD did not publicly announce the prices for the CPUs.

For more information on the ThinkStation P620, visit the Lenovo website

For more information on the new Threadripper Pro CPUs, visit the AMD website

‘Little Ani’ Might Be part of Disney+ ‘Kenobi’ Collection