Mark Waters & # 39; summer camp comedy isn't a total bombshell, but it does seem like the kind of memorable programming the streamer has avoided so far.

Just nine months after its inception, the original Disney + program has already covered the entire spectrum, from critically loved series like "The Mandalorian" to theater casts that are best forgotten (sorry, "Artemis Fowl"). Some of the programming is largely missing so far: the kind of instantly memorable original that wouldn't have felt out of place on Disney Channel in the late '90s or early morning hours, family-friendly fare to fill a lazy Friday night. And while there is nothing wrong with that, the lack of imagination shown in Mark Waters' "Magic Camp" is almost more depressing than the incomprehensible craziness of Kenneth Branagh's YA flop. At least this film was trying something.

The best warning of what's to come comes in the opening credits: The film was written by six screenwriters, and while many of the roughly half a dozen scribes (excluding the two additional ones with only "Story by" credits) needed to "Magic Camp" "To write" are quite talented people (the top duo Micah Fitzerman-Blue and Noah Harpster recently wrote the wonderful "A Nice Day in the Neighborhood", Matt Spicer and Max Winkler are both aspiring filmmakers) who find little of this magic The final credits don't even include Steve Martin, who wrote the first draft of the script and was once attached as the lead – that's how many cycles the script went through in just four years.

A constant back and forth between characters and scenarios – Adam DeVine is the best bill here, but “Magic Camp” starts with a focus on young Theo (Nathaniel Logan McIntyre), and then there's the over-the-top noticeability of Jeffrey Tambor as Camps crazier Director – makes it difficult to pinpoint exactly what this whole thing is supposed to be about. Obvious moral lessons and a predictable plot will help clear the early confusion and lull the film into a formula it will never attempt to break out of.

The film, which was shot back in 2017, was conceived before Disney even launched its streaming service and was originally intended to be released in theaters. Various controversies – star Tambor became the subject of various harassment charges as the film prepared to hit theaters in Fall 2017 – pushed its release back until it landed on Disney +, where it got in the heat of a long, boring, terrible summer arrived .

The concept isn't bad, and summer camp comedies have long been a staple of kid-friendly entertainment, from Heavyweights to Camp Nowhere, both iterations from The Parent Trap to Disney's own broadcast hit, Camp Rock. “This time around, the colorful crew of talented children (and one thing is clear: these children are all talented) are brought to a camp where learning magic is the main event.

Theo loves magic but has serious stage fright, possibly inspired by the death of his beloved father (Aldis Hodge, featured in many flashbacks) who introduced him to the craft. Judd (Josie Totah, seen here as J.J. Totah how the film was made before the young actress transitioned) is afraid to live up to parents' expectations too, since his father is a famous magician. Ruth (Isabella Crovetti) wants to do animal magic, but is afraid of touching rabbits. Vera (Izabella Alvarez) is kind of crazy, Nathan (Cole Sand) is a hypochondriac geek. Together they make up the Hearts booth at Magic Camp (or, as Tambors Roy Preston glamorously calls it, the Institute of Magic). They are a cute, fun, colorful crew and it is clear from the start that they will triumph over all the crazy stuff that is thrown at them as they try to turn into real wizards.

And yet the real transformation has to start from the supposed lead role of the film: DeVine as former magician Andy Duckerman. As the institute's biggest star – he won both the top hat and the golden wand, the biggest competitions of the camp, and you better believe that they play an important role in the film – personal upheavals shattered his dreams and he spent the last few years doing it to drive a cab in Vegas. This is being played as a tragedy of its own, of course, but it is made worse by the fact that Andy's former partner (literally) Christina Darkwood (Gillian Jacobs) is the flick's greatest mage and he has to see her face everywhere he goes. 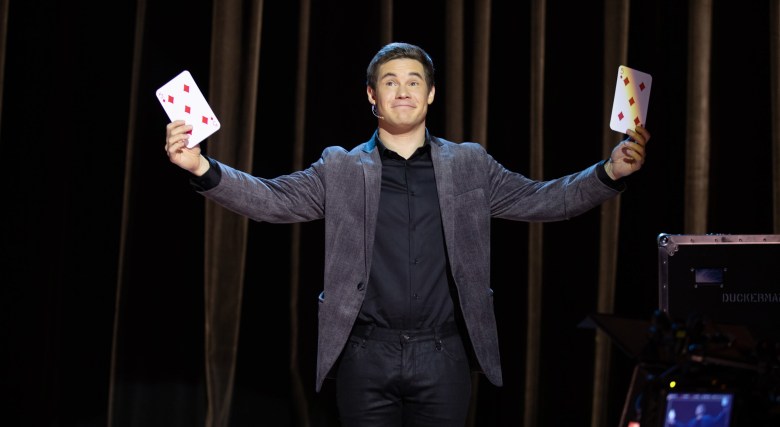 Trying to convince Andy to return to the camp as an advisor – Christina will be there too! – takes surprisingly little time. Basically Roy asks, and Andy leaves, reducing the obvious drama and making sure the film has enough time to really get into what matters: a steady stream of montages that show how Andy and the Hearts do something about a) magic, b) learning yourself, c) what really matters. The lessons from Magic Camp may be simple and anticipated, but they are still good, and as Andy (DeVine is a lot less frenetic here than in his other roles) is starting to believe in his campers and they are starting to bloom. The film is starting to use a welcome charm. It's unforgettable, but it kind of feels good right now, like so many other Disney Channel originals that seem to have inspired this new iteration.

Less obvious and far more necessary: ​​the kind of humor fans of Director Waters & # 39; "Mean Girls" wanted to see in the film. While Waters & # 39; funny joke can sometimes be seen – especially with interactions between the nerdy hearts and the other cooler residents of the camp, as well as a very funny gag about rabbit breeding – the film mostly plays everything safely and straight forward. It's hard to say because this is a family-friendly feature after all, where nice kids embrace their nerdy passions. But why not get a little weird with it? Again, this is about nice kids embracing their nerdy passions, but Magic Camp can't create enough zing to put on the kind of show they deserve, something weird, something different, something even a little magical.

Log In: Stay up to date with the latest movie and TV news! Register here for our e-mail newsletter.

Greenscreen.blog - September 23, 2020
0
Pokémon card lovers are everywhere, not just the kids of the 90s who were drawn to the Japanese show Pokémon, but the kids...

Greenscreen.blog - September 23, 2020
0
Oh ty to share! I've never checked out this app, but it looks interesting. I'll try it