Maxon releases Redshift for Blender and Metal in beta

Maxon has released the first public beta builds of both the new Blender integration plugin for Redshift, its GPU production renderer, and the new metal-native version of Redshift for current Macs.

Both open betas are available with Redshift 3.0.33, the latest version of the software.

The integration uses Blender's Python API and offers "pretty much the same" rendering options as the other 3D applications Redshift supports, although much is still in the works.

Functions that are currently not supported include proxies, texture baking, light linking, point clouds, motion blur and noise removal with the Denoisers OptiX and Altus from Redshift.

In addition, there is only "basic" support for AOVs – currently neither a Cryptomatte ID matting generation nor a DeepEXR export is available – and only the perspective and orthogonal cameras are supported.

The integration is currently only available on Windows and Linux, although Maxon comments in the release thread of his forum that work on a macOS edition will "hopefully" start soon. 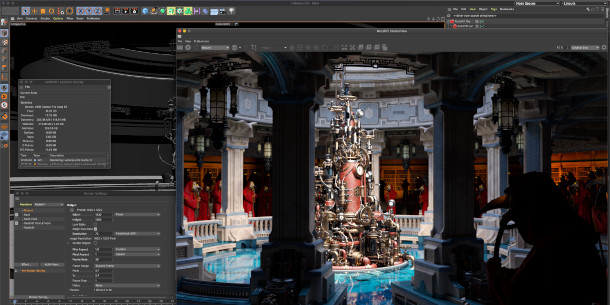 The new open beta requires macOS 11.0 Big Sur, which was released last week. and either an AMD Navi or Vega GPU, AMD's current and next generation graphics cards.

That means the machine is less than three years old: Navi GPUs first became available on Mac desktops with the iMac Pro in late 2017 and hit Mac laptops the following year.

According to Maxon, it is "working with Apple and AMD" to determine whether the older Polaris GPUs from AMD can be supported with "adequate performance" in the future.

All users can now perform a temporal denoising with the Altus Denoiser via the command line.

Since we last covered the software, the Redshift 3.0 versions have moved from experimental builds to (semi) official production versions.

Although not all of the features originally planned for the 3.0 release series have been implemented, Redshift 3.0.33 can now be downloaded directly from the product website alongside Redshift 2.6.56.

Pricing and system requirements
The new Blender integration plug-in and the Metal edition of Redshift are available with Redshift 3.0.33. Both are currently still in beta.

For more information on the new Blender plugin for Redshift, please visit the product forums
(Requires a free account to view the board)

Download the trial version of Redshift 3.0.33
(Includes both the Blender plugin and the Metal edition)