Matt from DIY Perks' YouTube channel was able to significantly improve the overheating problem on the Canon EOS R5. With an improved internal copper heat sink and active cooling baseplate, it was able to take unlimited 8K RAW recordings.

Matt from DIY Perks' Youtube channel produces really interesting content. I've been following his work for a couple of years and can definitely recommend his videos if you're interested in electronics, PC building, custom cooling, and DIY action in general. His latest video is even more interesting to us filmmakers as he apparently bought the Canon EOS R5 camera – and decided to address the overheating issue.

Once announced, the Canon EOS R5 received a lot of attention for its excellent specifications. Features like 8K RAW 30fps internal video with full sensor display, IBIS, Dual-Pixel AF and 4K 120p made headlines worldwide. Unfortunately, after the first real-world tests appeared, it was clear that there was a problem. The camera overheats pretty quickly.

Canon initially responded to the situation by answering our questions in an interview and providing their opinion as well as an official statement on the overheating issue of the EOS R5 and R6. When first introduced in 8K / 30, the camera stopped recording and turned off after 20 minutes and in 4K / 120 after just 15 minutes. What was worse, it could be a long time before more 8K shots were possible. 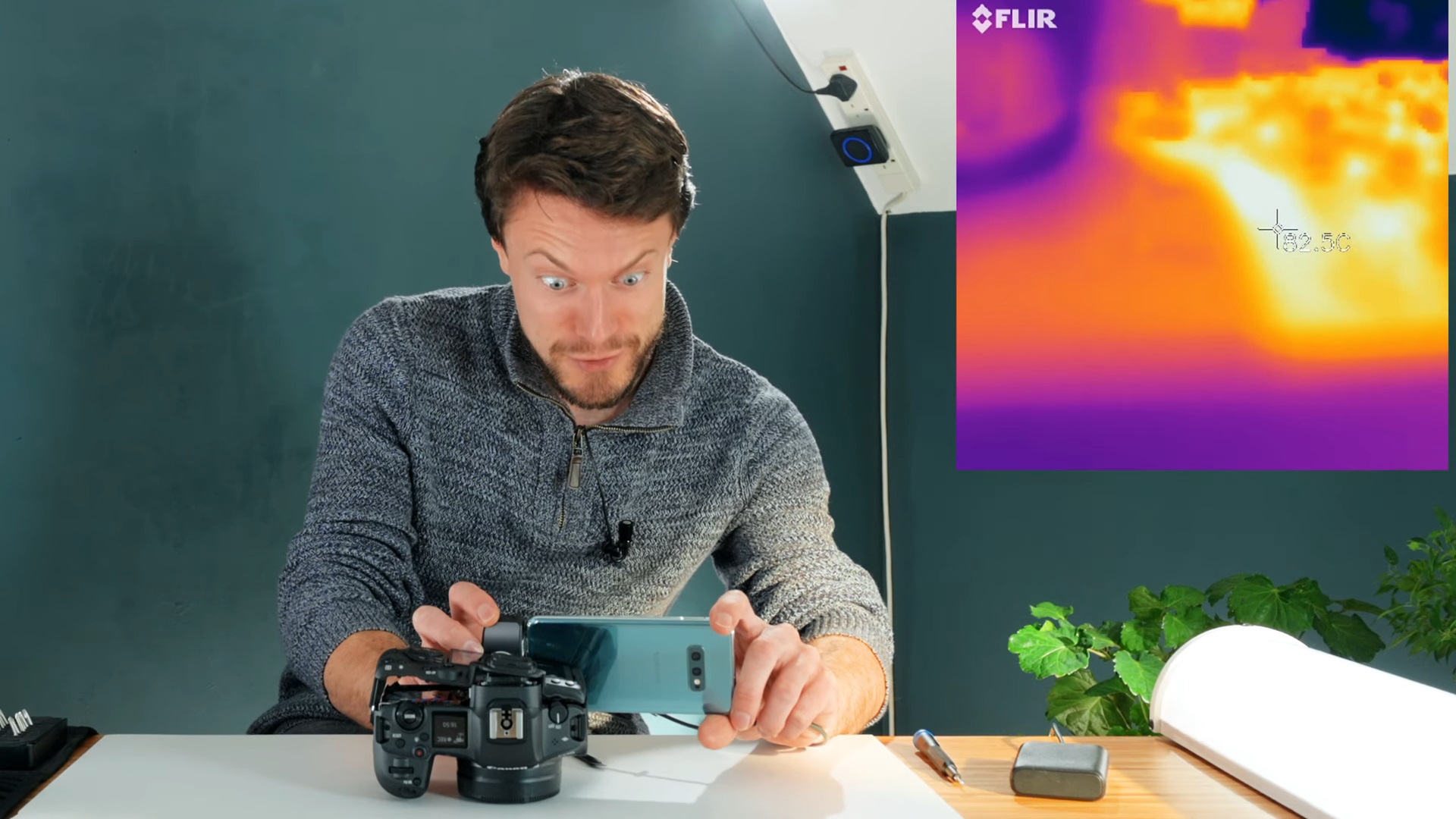 This obviously disappointed many filmmakers who were initially enthusiastic about the EOS R5. Canon therefore released a firmware update 1.1.0 at the end of August. This update improved the management of overheating control, allowing slightly longer recording times (up to around 25 minutes in 8K RAW) and, more importantly, much shorter recovery times between takes. Check out our EOS R5 review to see how well the updated camera works in the real world. Also, don't forget to check out our Canon EOS R5 lab review.

Shortly after the EOS R5 was released, there was speculation that the overheating problem was more of an issue with the timer. Sure, the camera got hot, but not enough to warrant the ridiculously long recovery times. Did Matt confirm these speculations in his video?

After filming the EOS R5 with a thermal imaging camera, he confirmed that the warmest point was under the display. When he opened the camera, he saw that the heat was coming naturally from the processor. The environment reached up to 82 ° C. He found the heat sink, which is supposed to dissipate the heat from the image processor, too small and not properly connected to the processor. 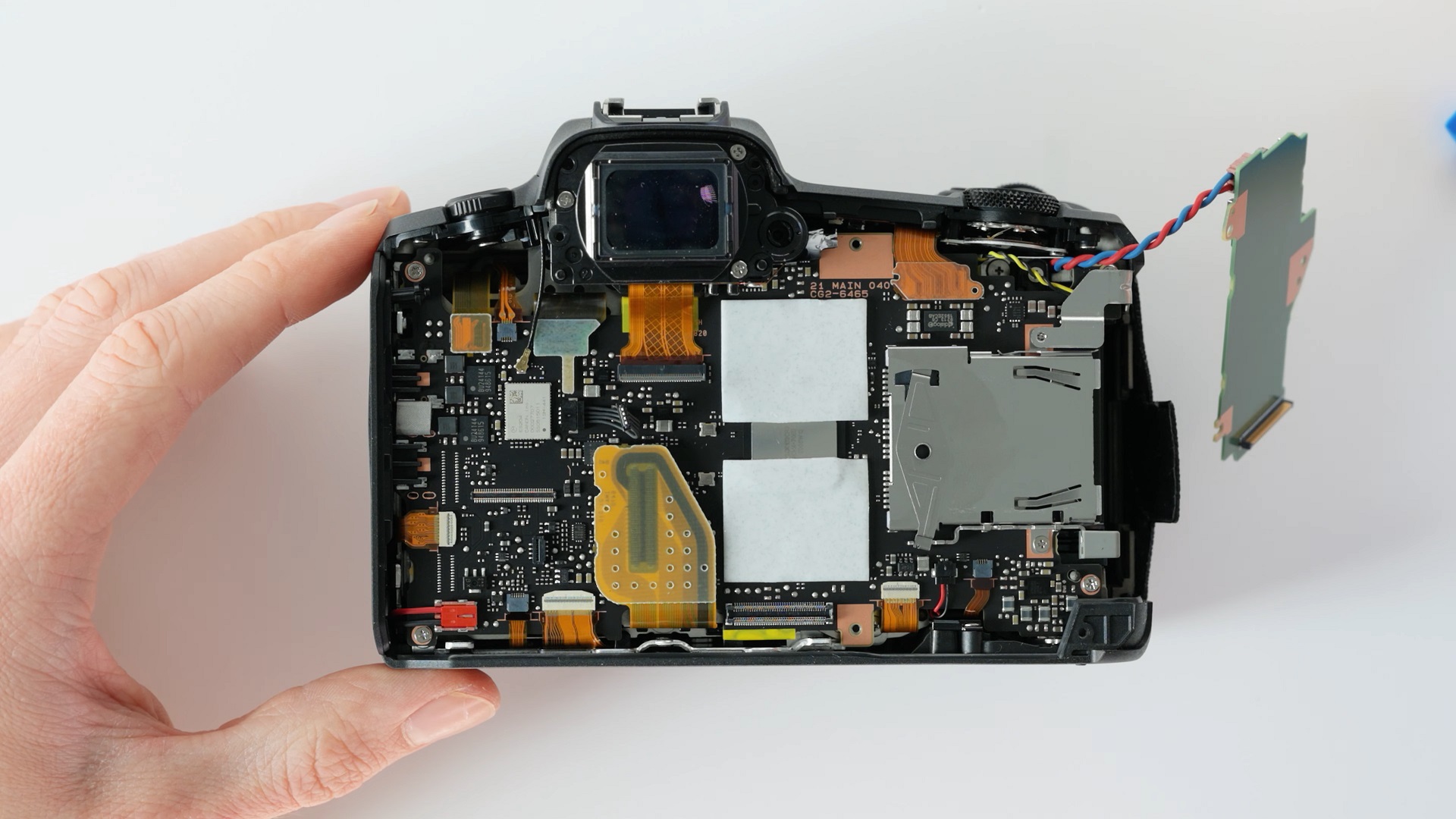 Matt then created an L-shaped copper plate and water cooling device for the image processor, using a more efficient thermal paste instead of the Canon thermal pads. This reduced the temperatures around the processor to more than half. But guess what? The EOS R5 with the original firmware still shut down after 20 minutes of 8K RAW recording. This shows that with the initial firmware, the camera did not take the temperature to decide when to shut down. It was programmed to shut down after a certain period of time and implemented a long recovery time.

Overheating shutdown timer was justified: camera gets too hot!

However, it is important to clarify that Canon really implemented the timer in the camera to protect it from overheating and not just paralyze the camera as some have said. With a poorly designed heat sink and thermal management, Canon made more of a mistake in my opinion.

Matt then installed the 1.1.0 firmware update and the timer problem went away. He got an unlimited 8K RAW shot. The water cooling device designed by Matt is of course very cumbersome and not usable in the real world because the camera was open all the time. He therefore decided to make his own copper heat sink that can be implemented in the camera so that his body can then be closed again. 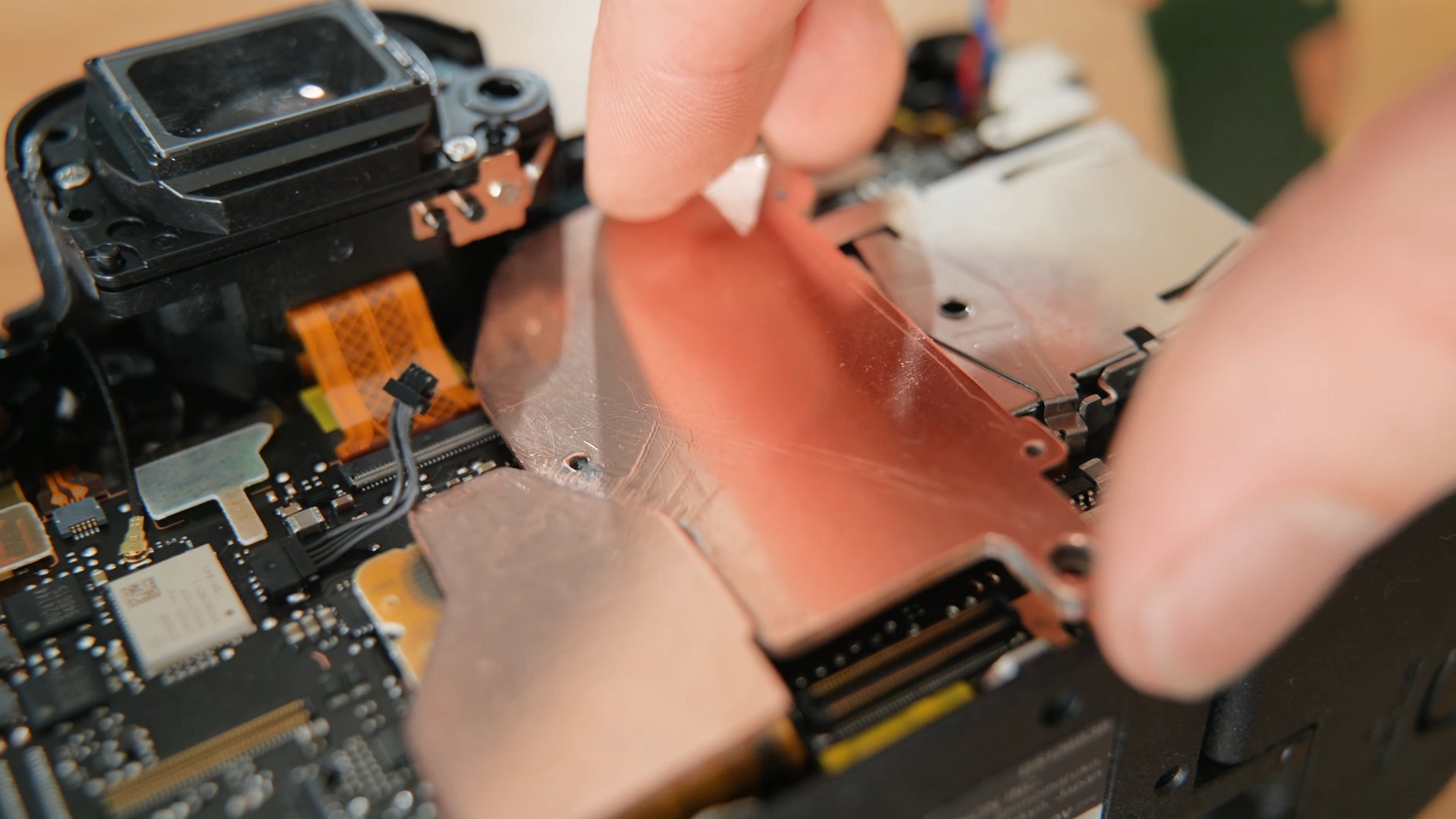 To experiment, Matt temporarily removed his water cooling solution to see how the camera could handle overheating with his self-made larger copper heat sink and better thermal paste in place. Now Matt managed to get 39 minutes of 8K RAW footage. That is 43% longer than the 25 minutes with the original Canon heat sink. After a break of 5 minutes, the camera was able to record another 30 minutes. In a cooler room, Matt even managed to get longer times. 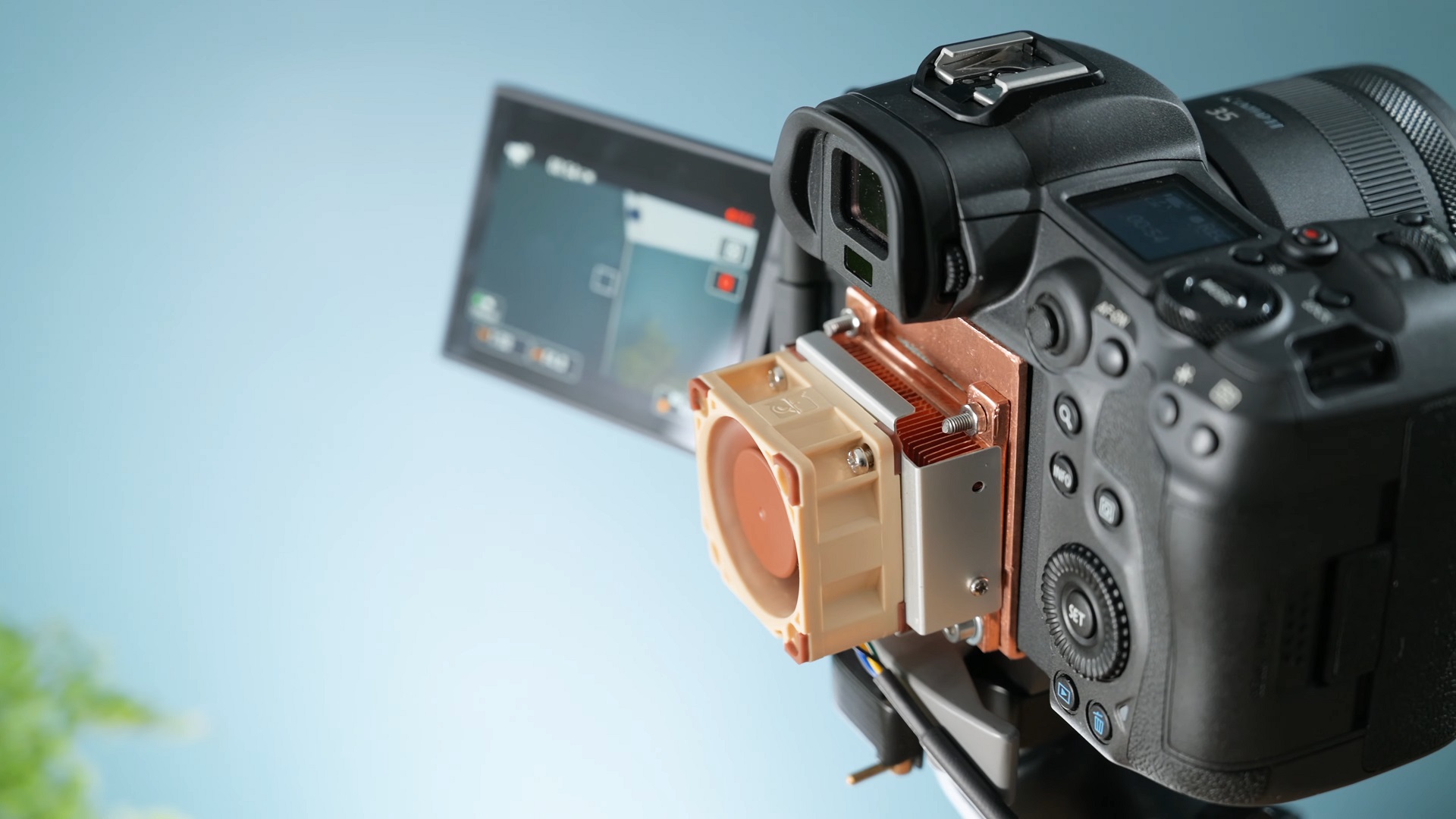 To get unlimited shots, Matt also attached an active cooling device to the back of the camera. We have seen something similar from Tilta. However, without the modified internal heat sink, the effect would be minimal in my opinion.

He also designed a more elegant solution using a custom 3D printed base plate that blows air onto the back of the camera and cools the plastic back plate while the display can still be closed. Indeed, with these attachments, the camera was able to record indefinitely in a relatively cool environment. In a warm room or on a sunny day, the EOS R5 would probably still have a recording limit. 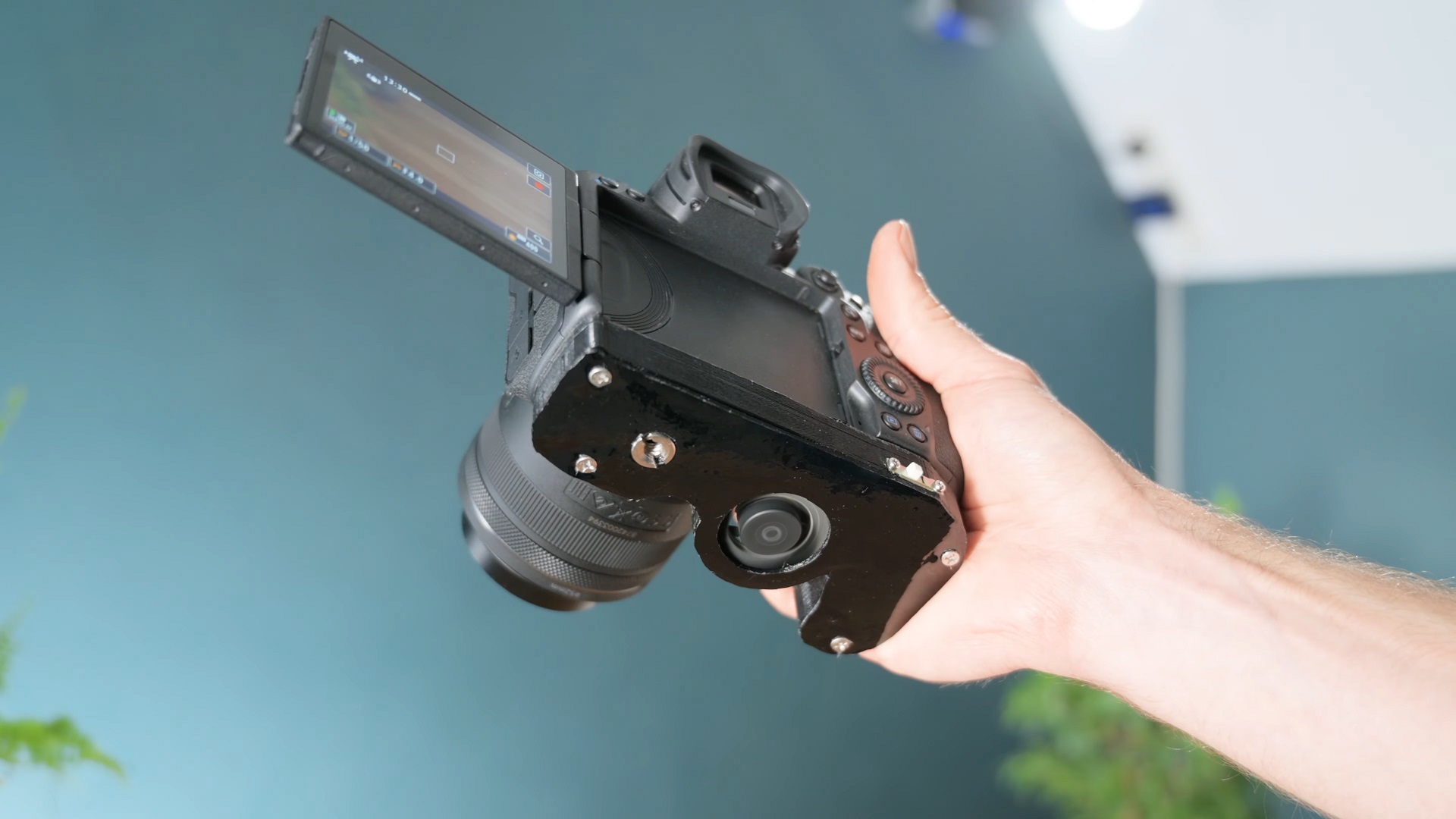 Overall, I think this is a great feat from Matt, and I'd love to see Canon implement an upgraded heat sink into some of their professional-grade mirrorless enclosures.

The Greatest Movies of 2020, In keeping with IndieWire’s Employees

The Do’s And Don’ts of Writing a Tagline for Your Movie...