500 artists at MPC Film's studios in London, Montreal and Bangalore worked together to bring the 9 main characters of The One and Only Ivan to life: Ivan, the gorilla, Bob the dog, Ruby, the baby elephant, Stella, the Elephant, Frankie, the Seal, Murphy, the Rabbit, Snickers the Poodle, Henrietta the Chicken and Thelma the Parrot. The studio also produced the photorealistic full CG environments and digital set extensions for Disney + Original.

In the film, directed by Thea Sharrock, a gorilla named Ivan tries to piece his past together with the help of an elephant named Ruby while they work out a plan to escape from captivity. The film's standout cast includes Bryan Cranston and the voices of Sam Rockwell, Angelina Jolie, Danny DeVito, Helen Mirren, Brooklynn Prince, Chaka Khan, Mike White, Ron Funches and Phillipa Soo.

MPC Film was invited to be part of the filmmaking process from day one to develop a custom production workflow that would allow director Thea Sharrock to create a story that is largely animal-led, with large passages of script without human actors. Davis met with the filmmakers in 2017 to create the project blueprint and plan the visual effects requirements. This included drafting the characters and environments, virtual photography and previs, and overseeing the complex VFX and animation work that MPC Film's artists would soon be working on. 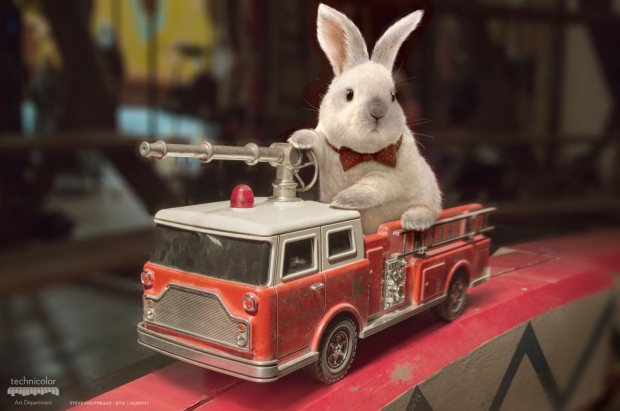 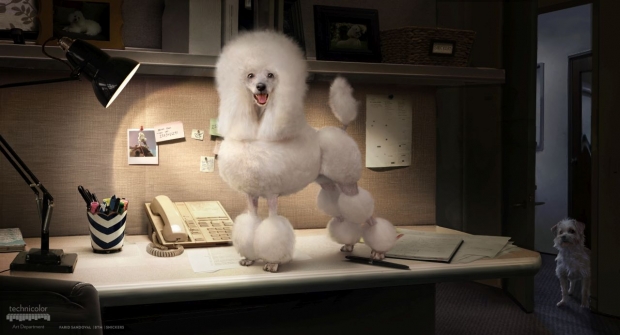 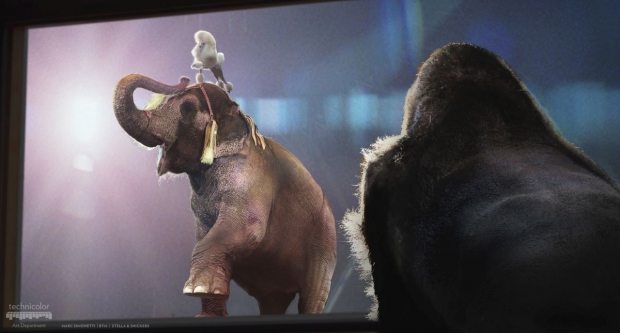 The art department at Technicolor's preproduction studio in Culver City, Los Angeles initially designed concepts for characters like Bob, the Dog, Frankie, the Seal, Snickers, the Poodle and Thelma, the Parrot, environments like the mall and the jungle, additional art for sequence frames . The art department also helped visualize a bespoke “Ivan” version of the famous Disney Castle opening.

The One and Only Ivan had two distinctly different phases of shooting. The first was a traditional set and location shoot, while the second was a virtual shoot for the full CG shots – roughly half the film. The virtual production process started with black box rehearsals with puppeteers and a motion capture performance artist for Ivan. This allowed director Thea Sharrock to block the sequences and approve the set before shooting. A two-week motion capture stage shoot was held to capture Ivan's physical movement using the recorded playback of the voice actors and to control the tempo of the scenes. Puppeteers played the other animals to give the actors eye lines and a rough blocking layout for the MPC animators. After motion capture scenes were selected, they were given to the animation team for layout animation.

The motion detection data for Ivan led the block; However, the characters were then all animated by hand. According to Davis, “After the master scenes for animation were approved, the clips were used to drive MPC's Genesis Virtual Production Toolkit. This enabled the filmmakers to use virtual reality tools to capture the data through the eyes of a virtual set of camera tools. With dollys, camera heads, cranes and steady cam, the filmmakers were able to record the master scenes on a stage and view the recorded animation clips from any perspective. "

A large part of MPC's work has been meticulously replicating the primary backstage set as a digital mock-up so that the filmed footage and full CG footage blend together seamlessly. In addition to the primary set, the MPC environment team also created full CG footage of the African plains, the exterior of the Big Top Mall and the CG extensions of the dense jungle. Great care was taken to match the full CG footage to the cinematic look and feel of the live action sections of the film. Each of the distinctive features of the camera lens has been replicated and used, and subtleties like breathing the lens in during focus shifts have been incorporated into full CG shoots for added film realism. A lot of the footage in the film takes place at night and the backstage environment in particular was shot with very shallow depth of field with lots of light sources and reflective materials like water, glass, glass bricks, etc. MPC's artists took great care to ensure that the materials, depth of field, atmosphere, reflection, and refraction of the glass and water all seemed to be as physically correct as possible in order to achieve a realistic, beautiful, and immersive environment.

Sharrock's assignment for Ivan and the other characters was for them to be photorealistic, talking animals, but it was crucial that they connect with the audience and deliver the humor and emotion that are so important to the story. For much of the film, Ivan is tied to a cage. To make the audience feel like they were with him, the filmmakers wanted close-ups on his face, which makes it crucial that it be crafted down to the smallest detail. The MPC Character Lab team spent a lot of time researching gorillas, learning about their bone structure, muscles, the subtle nuances of their movement and behavior, and most importantly, their eyes. Ivan's eyes had to figuratively speak to the audience and his thoughts and feelings had to be conveyed through subtle expressions. A handsome gorilla named "Zawadi" became a favorite and main reference for Ivan. From chickens to elephants to every other animal in The One and Only Ivan, a balance had to be struck between real animal behavior and engaging, emotional performance.