The release, slated for shipping later this year, includes a number of new tools for applying and manipulating surface detail, including a new thick skin system that can only change the surface layer of a sculpture.

Updates to ZModeler, ZBrush's toolset for modeling hard surfaces, will also be released. for Sculptris Pro, its dynamic tessellation system; and for object manipulation and rendering.

The new thick skin system restricts shaped details to the surface layer of a model
Some of the new features in ZBrush 2021.5 are intended to recreate the surface effects possible in traditional sculpting and mimic the behavior of real clay.

One of the most important is Thick Skin, a new system that mimics the softening of the surface layer of oil-based clay with a source of heat to shift details.

When on, sculpting is limited to the surface plane of a model and does not affect the underlying geometry. This allows surface details to be added and wiped off again at will.

On the livestream, Pixologic described it as a quick way to achieve clay-like surface textures, as shown in the picture above: "the work of art," as in-house artist Joseph Drust put it.

Other use cases include adding creases to characters, scales to creatures, or creases to sculptured fabrics.

While users can already detail non-destructive details of sculpts using Morph Targets to save the base state of the model, Thick Skin looks more intuitive and versatile.

It works with any standard ZBrush brush, alpha and stroke type, and the thickness of the imaging layer can be adjusted to determine how far strokes dig into or build up the surface. 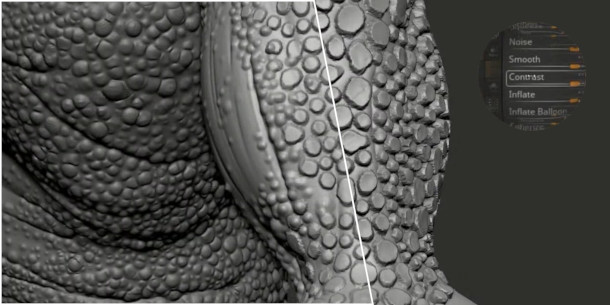 It can be adjusted globally using a new contrast regulator in the "Deformation" sub-palette. or the effect can be painted by hand with the new ContrastTarget and ContrastDelta brushes.

Pixologic describes it as particularly useful when 3D printing models as it is possible to highlight surface details so they can be printed more clearly without the risk of altering the underlying sculpture.

The update also introduces a new SmoothAlt Brush, which smooths the surface of a model more gently than the standard Smooth Brush and creates less visible artifacts.

The functionality was already available in the software by using the alternative smoothing algorithm and adjusting the PolishStrength setting. It was now shown as a separate brush.

This allows users to isolate part of a model, add surface details using Sculptris Pro, and then redisplay the entire model: this is what Pixologic calls "Mini-HD" mode. 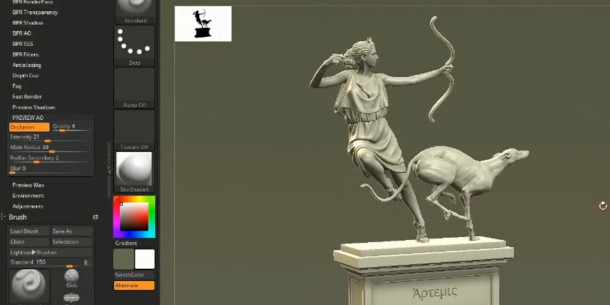 When enabled, ambient occlusion is applied to the preview, which darkens recessed areas of a sculpture, emphasizes surface details, and makes it easier to accurately assess its impact.

The Best Preview Render (BPR) system also gets a new filter, Radial Overlay, which mimics the effect of a beam of light illuminating a model.

Users can control the direction and radius of the "wave". However, because the effect is applied as a post-processing, it has little effect on render time and can be stacked with other filters. 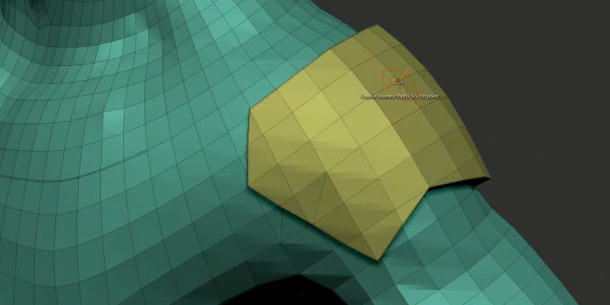 Not only can it control the topology of a mesh, but it can also create surface shapes by slicing a closed area on the mesh surface, converting it to a poly group, and then extruding or indenting the entire group.

By default, ZBrush will automatically create creases along new edges created this way.

The software also has a new Bend Shortest Path option, which creates a crease along the shortest set of existing edges that connects two points on the surface of a mesh. 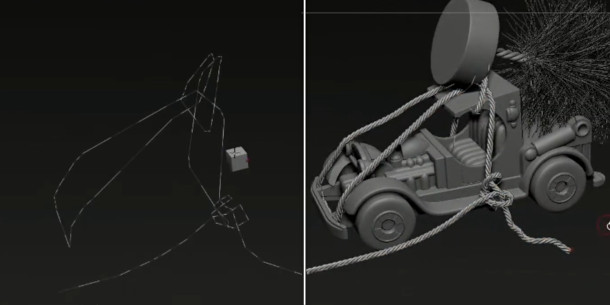 It provides an intuitive way to model objects like ropes and chains by roughening the form with ZSpheres, converting it to curves, and then using an InsertMultiMesh brush to create the final geometry along the curves.

The underlying curve remains active, making it easier to adjust the rope or chain after it is created.

New options for axis rotation for navigating models and support for 3Dconnexion input devices
Other changes include a new sub-palette for the axis rotation in the transformation settings, with which users can restrict the rotation of a model to a single axis or rotate in fixed increments.

If you set the rotation to the Y-axis, you can achieve an effect like a conventional turntable display.

In addition, ZBrush supports a longstanding user requirement and now supports native 3Dconnexion control devices such as the SpaceMouse.

The hardware can be used in conjunction with a traditional mouse or pen so that a model can be zoomed and rotated with one hand and sculpted on it with the other.

Pricing and system requirements
ZBrush 2021.5 is slated to be released this year: Pixologic says it will ship "for the holidays". As usual, the update is free for existing users.

An overview of the features in ZBrush 2021 can be found on the Pixologic website
(No further information on ZBrush 2021.5 at the time of writing)