The SWIT LC-D421 is a versatile four-channel charger. This device consists of the main charger with interchangeable plates, so you can customize it to suit your needs to charge Sony NP-F, Canon LP-E6, Sony BP-U, Panasonic CGA, JVC50 batteries, etc. at the same time . Let's take a closer look at the SWIT LC-D421 after a few months to see if it can become your next all-in-one charger.

Disclaimer: As usual, let me first say that I am not a SWIT ambassador. Like every other article on CineD, SWIT or any other brand didn't pay me to write this article. However, the company sent me the product for free review. This rating is my unbiased opinion, as SWIT did not change, influence or contribute to the article before it was published.

The SWIT LC-D421 is a four-channel charger. This device can charge four DV batteries at the same time. The main purpose of this type of product is to make the lives of filmmakers easier by eliminating the need to carry multiple chargers on the go or at home.

I recently talked about the Fxlion PL-SP40 four-channel charger that can be used to charge Sony NP-F and Panasonic D54 / VBD batteries. While both products can charge four batteries at the same time, the SWIT LC-D421 has removable battery plates, while the Fxlion PL-SP40 has everything built-in.

In short, the SWIT LC-D421 is a box with four connections on top of the device. When buying, you need to choose which battery plates you want. I received mine with two Sony NP-F plates and two Canon LP-E6 plates. Other plate models are also available; Below is the full list of compatible batteries:

The main charger is a 220mm x 125mm x 69.3mm plastic box. The plastic doesn't feel cheap, I wouldn't drop it, but it feels like it could take some abuse.

The SWIT LC-D421 weighs around 700 g, which is almost the same as the Fxlion PL-SP40, although the latter is slightly smaller. 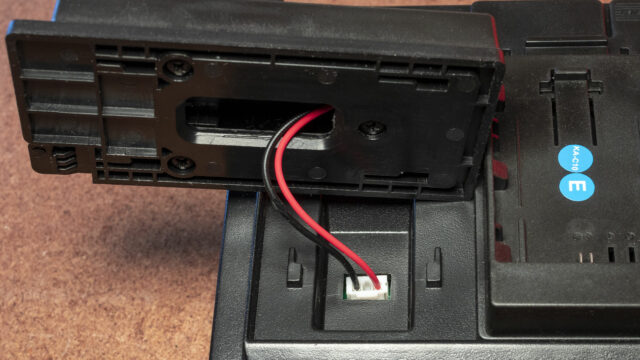 Once you've connected the battery plates to each power outlet, the plates slide into the charger and snap into place. 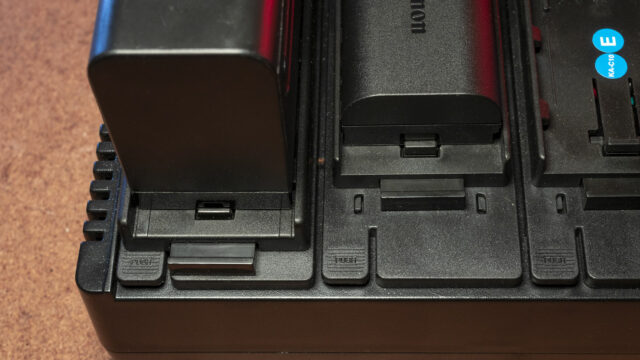 To remove a panel, you need to squeeze and slide a small plastic tab back to release it. Be careful not to damage the plug of the plate inside, which looks a bit fragile.

When you place a battery in a battery plate, the attachment is firm but not tough. Usually on a cheap charger the tolerances of the plates are not correct, but this SWIT charger got it right: when the battery is in place, it is not too tight or loose. To remove the battery, press another tab and pull the battery out. 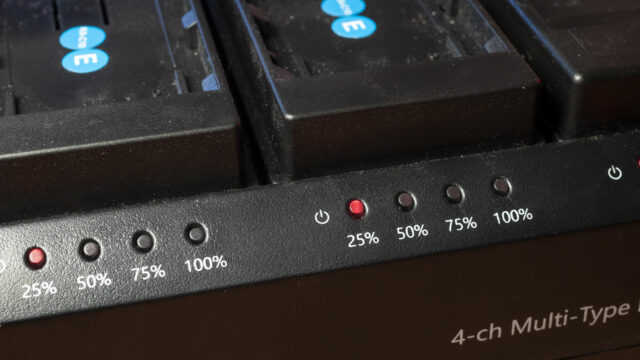 There are four LED charge indicators under each battery plate: 25/50/75/100%. I found that the device shows the charge percentages and actual battery status pretty accurately. This charge indicator system is also far more accurate and manageable than the Fxlion, which changes from red to green as it charges when the battery is fully charged.

The SWIT LC-D421 is connected to the mains and cannot be powered by a V-Mount / Gold Mount battery. On the back of the device there is an on / off switch next to the power plug. 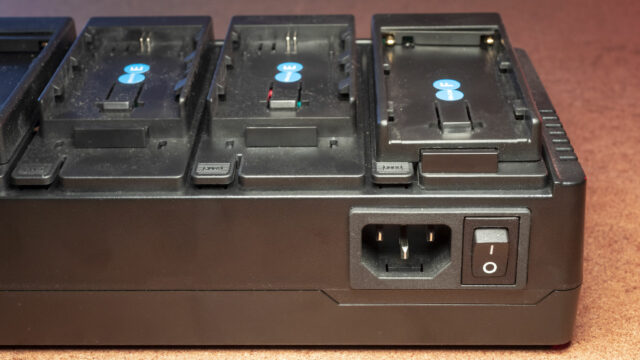 According to the company, the power consumption of the charger is 100 W and the charging capacity is 8.4 V DC with a maximum of 2 A per channel, with the exception of Canon LP-E6 batteries, which can only be charged with 1 A per channel. As a direct comparison, the Fxlion PL-SP40 only outputs 1A per channel, so the SWIT should be twice as fast, but more on that later.

It is worth mentioning that when the SWIT LC-D421 is switched on, a built-in fan is switched on immediately, even if no batteries are inserted. There is no way to turn this fan off. This fan is one of the main drawbacks of this charger as it is relatively loud. I couldn't measure how loud it is, but I wouldn't sleep next to it. If you take it with you on the go or at home, better carry it in another room.

During all of my tests, the charger never felt really hot. One strange thing is that the Fxlion device doesn't have fans. I contacted the company to learn more about it and here is what they told me:

For the fan, our product requires that it can continue to be used normally at an ambient temperature of> 40 ° C. The service life of the internal components is not affected by the high temperature.

Since it can charge 4 channels at 2A at the same time, even if it doesn't feel hot at room temperature, but when the ambient temperature reaches 40C the internal temperature will still exceed the ideal operating temperature of the components, so we added a fan.

I honestly prefer to have a fan in a product rather than not and see it stop working in a few months. However, this fan noise shouldn't be a problem for rental houses or production companies / filmmakers with their own equipment room.

Before we dive into my various tests, let's first say that load times are very relative. Indeed, it depends on the room temperature, the remaining battery charge, the age of the battery, etc. All of my tests give you a global idea, but the results may vary depending on your batteries.

To be a bit more scientific, the theoretical charge time can be determined by dividing the battery capacity by the charge output value. For example, a Canon LP-E6N battery has a capacity of 1865 mAh and the SWIT LC-D421 has a charge output of 1000 mAh per channel. Therefore, the charger should take about two hours to charge this battery. For a Sony NP-F970 battery with a capacity of 6600 mAh, the charging time should be about 3 hours and 30 minutes. 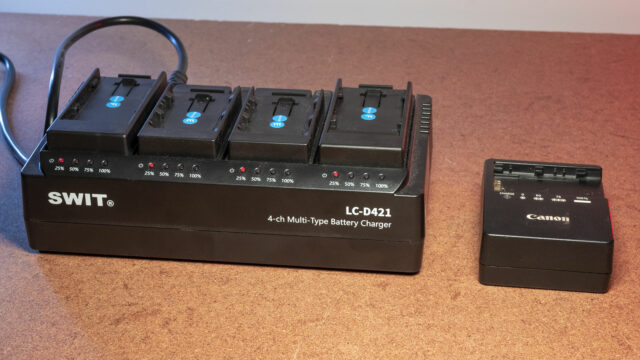 First, I decided to compare the charging times between the SWIT LC-D421 and an official Canon LC-E6 charger. The Canon LC-E6 has an output of 8.4 V / 1.2 A, while the SWIT can output 8.4 V / 1 A. This means the SWIT unit should be a little slower than Canon's.

For my test, I only used a Canon LP-E6N in the SWIT LC-D421. Without much of a surprise, the Canon LC-E6 charger did the job in 1 hour and 45 minutes, and the SWIT took 2 hours and 10 minuteswhich is 20% slower. I ran the test twice and found similar results.

I also ran a similar test that charged two Canon LP-E6N batteries on the SWIT LC-D421. The charging times were close to about two hours. I contacted SWIT about these results and here is their answer:

SWIT always has the highest value for security, reliability and sustainability. Since Canon's E-Type battery has a relatively small capacity, 2A charging exceeds the normal charging range of the battery cell, which results in a significant reduction in battery life. Therefore, the original Canon charger can only charge 1.2A. The LC-D421 was specially developed for e-batteries with current limit processing. Only 1A charging is supported, so the charging time is a little longer than the original charger. Other types of batteries can be charged with the LC-D421 at 2A.

I did another charge test to spice things up, this time using Sony NP-F970 batteries between the SWIT LC-D421 and the Fxlion PL-SP40. I put two batteries in each charger. The SWIT charger took 3 hours and 18 minuteswhile the Fxlion was doing it about 5 hours.

As you can see, the results of these charging tests are not bad. However, the SWIT charger needs a little more time to fully charge the batteries compared to an OEM charger. Is it a deal breaker? I do not believe that.

For me, the SWIT LC-D421 is one of the most versatile and universal chargers on the market. It covers most of the batteries that filmmakers use every day – particularly the Canon LP-E6, Sony NP-F, and Canon BP – and it will definitely speed up your workflow. Is it perfect? ​​No, the biggest downside for me is the fan noise, which some filmmakers who don't have a separate room to charge their gear may find annoying.

What do you think of this four-channel charger? What type of battery do you charge the most? Are you using third party battery chargers? Don't hesitate to let us know in the comments below!