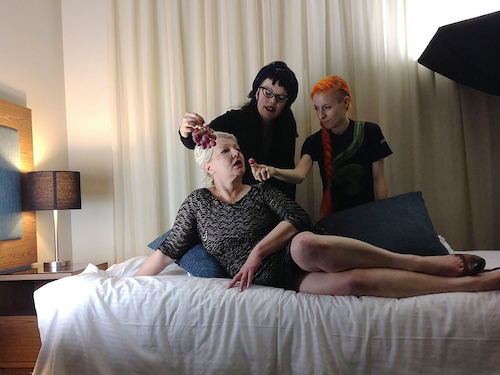 On the set of Morgana

Filmmakers: If Morgana gets into financial trouble after moving to Berlin, you are there to capture her after basically moving to Germany to keep filming with her. I think the film was completed through a combination of Kickstarter and government grants. But did you still have trouble raising funds at that point? How did the situation affect production?

Hess: As with many indie projects, our budget was cobbled together. We were self-funded throughout the shoot and completed the post-production with Kickstarter and a couple of small grants from Queer Screen and Screen Australia.

I ended up in Berlin with Morgana because I worked for her, made and edited her films. After she moved to Berlin in 2015, I made three films that she produced. I worked for her the whole trip and basically shot the footage for our documentary about my obligations to her. She was very kind to let me take the time of my own accord. It was pretty chaotic for a couple of weeks.

Peppard: This is definitely something we've talked about a lot! We were very concerned about not demonizing or pathologizing things that were already stigmatized: kink, porn, and female sexuality in general. From a storytelling perspective, our approach has been to integrate sexuality as much as possible into the character's personal and emotional journey. A big part of this was allowing the audience to really get to know her as a person before some of those riskier elements came into play, so you can really get a sense of how closely the sexual experiences are intertwined with their humanity and self-discovery. 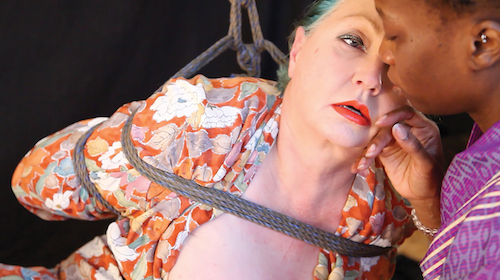 Filmmakers: While it is exciting that Morgana touches so many lives through the camera, sometimes public attention still has a price to pay for her own wellbeing. Have you ever worried that you did more harm than good by making this movie? Were you forced to set certain limits?

Hess: I report to Morgana a lot. It's something she's been through with her own work and publicly appeared as a pornographer. When you lift your head over the parapet as someone who does things differently, no matter how harmless, it will always come with some negatives.

When we realized that this film wasn't going to be a short but a feature, we also discussed the possibilities with Morgana. She understands the weight and responsibility of standing there. Ultimately, we put the choice in her hands and she kept choosing to let her story be told. There are definitely limits protecting various elements that we have established with it. We just keep the dialogue between us very open and very honest. That way, there is always room to express yourself if someone is feeling uncomfortable or needs help.

The subjects she later deals with in our film were lifelong subjects for Morgana, starting out as a young girl. I don't want to speak too much for Morgana in this area, but I feel like her filmmaking and publishing her story has been a great redeeming force in her life. She had a very conservative and unhappy upbringing and marriage that she never fit into or felt like herself. She eventually became invisible and voiceless when she lost her "trophy woman" status. She was completely isolated from her pain – cut off from any community, creativity, sexuality or self-esteem.

After Morgana started making her films and going public, she found an open and loving community that she could fully accept as a person. She was able to reconnect with her own body and sexuality. And she found a creative voice that also inspired others around her.

Even so, we were definitely aware that we were negotiating respectful boundaries with Morgana to protect her and the people she loved. There were definitely places she didn't want to go with the story and people she didn't want to involve, and we always took care of her wishes in that regard. We also gave her permission to rough cut in case she had any significant problems with the way we told her story and the material it contained. She had a few changes, but nothing important, and I think that's because the process of filmmaking was an ongoing process of checking in with both her and each other.

Filmmakers: Do you see the film as a kind of “teaching aid” or guide in any way? Are you reaching certain groups?

Hess: We definitely didn't want to develop a teaching tool on purpose – we really just wanted to explore the truth of Morgana as a person. We have certainly heard feedback from some that it opens up conversations that we are very excited about. It has allowed a lot of people to make the connection that their parents or mothers are people with sexual needs, which is a nice thing to make people aware of. We also get many people grateful for the age-positive message that Morgana's personal key point she likes to make: "There is no expiration date for your sexuality."

Peppard: I don't think we ever saw the film as a teaching tool when we made it. It has always been more of a human journey, a hero's journey if you will. I think people pull out all the elements of the story that appeal to them the most on a personal level.

We were actually quite surprised at the diversity of people history has reached. We had some pretty emotional reactions from men, for example, which surprised us since it's a movie with so many subjects that seem specific to women. Maybe it was educational that way – than maybe pulling the curtain back on feminine desire and sexuality.

For me the film is the journey of an artist who finds her true identity and creative voice. In the film, Morgana goes through two cycles of death and rebirth. First, her conservative housewife identity is shattered and she is reborn as a phoenix, a beautiful but idealized version of the self that is ultimately a new facade. In the second cycle, where she is literally buried (on screen) and reborn, Morgana emerges as a more realistic and complete version of herself as she faced problems from her past head-on. Ultimately, she learns to be realistic about her struggles while continuing to make films and live in the world as an artist.