Originally published on March 18, 2020. Scroll down for news on the final release.

Unity Technologies has released the first public beta of Unity 2020.1, the first of two scheduled updates for the game engine and game development environment this year.

As usual, the update contains a wide range of functions. Below, however, we've selected five highlights for CG artists as opposed to developers, including changes to character rigging, animation, lighting, and rendering.

The hardware accelerated ray tracing function on the RTX graphics cards of the current generation of Nvidia was introduced in the preview in Unity 2019.3. However, the initial implementation was mainly focused on visualization work.

As with Epic Games in Unreal Engine, both a hybrid ray tracing / rasterization pipeline for real-time work and a full-path tracer for progressive rendering have been introduced.

Ray tracing is also supported for hybrids and alembic caches, so that ray tracing renderings can be created from animations or simulations created in other DCC software. 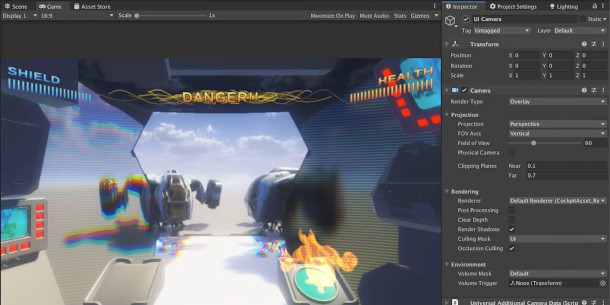 2. Stack the camera in the Universal Render Pipeline (URP only)

Although RTX-accelerated ray tracing is only available in the High Definition Render Pipeline (HDRP), which is intended for consoles and desktop systems, the counterpart for mobile phones and web apps is also updated.

Formerly known as the Lightweight Render Pipeline, the Universal Render Pipeline (URP) now supports stacking cameras so that users can overlay the output of multiple cameras into the rendered output.

The proposed use cases are not intended as a full-fledged real-time compositing system, but rather include the overlaying of a 2D user interface over a 3D scene.

In the first implementation, stacking cameras is not supported by either the 2D renderer or the VR multi-pass mode. According to Unity Technologies, this will be added in "upcoming versions" of the URP.

New lighting features in Unity 2020.1 include support for the Russian roulette as an option to terminate reflected light rays when calculating global lighting, rather than setting a fixed maximum number of reflected light points.

The system takes into account the importance of each light path for the GI, with the likelihood that the path will end prematurely each time the beam bounces off a dark surface.

The method reduces GI baking times, as you can see in the demo image above, although Unity Technologies warns that “aggressive” Russian roulette values ​​can cause noise in lightmaps.

Other lighting changes include separating the lighting settings from the Unity scene file so that they can be reused between projects.

The GPU Lightmapper, which was originally introduced in Unity 2018.3, is also getting closer to feature parity with its CPU counterpart and now supports A-Trous filtering, baked LODs and sky occlusion jaws.

Updated July 23, 2020: Unity has published a detailed summary of the new lighting features in Unity 2020.1.

Other changes include improved scanning in both the CPU and GPU Lightmapper, better packing of UV rays when unpacking the geometry for baking lightmaps and the support of cookies (gobos) in baked lighting.

Unfortunately we cannot find a demo in action, although you can find a more detailed description of the workflow in the Unity Beta forum.

Proposed use cases include baking the movement generated by a restriction system – such as the secondary movement of clothing or props – onto a character's skeletal movement.

The constraint itself could then be removed at runtime, maintaining secondary movement but improving real-time performance.

Updated July 23, 2020: Another interesting new animation technology is available in the final version as a preview package: Kinematica.

For more information, see this recording of a session of the Unity 2020 conference from Unity.

Unity 2020.1 also includes a number of updates to the engine's 2D physics system.

The ones shown in the video above include improvements to the position restrictions for Rigidbody2D components, which make a rigid body “completely solid under any force (at) almost zero running time costs”.

In addition, EdgeCollider2D now allows users to control the start and end points, overlapping edges with other colliders to maintain a continuous collision area.

The video also shows improvements to the 2D spacer when simulating chains and "basic" soft bodies.

Unity Technologies has also introduced automatic simulation per frame that allows a game's physics system to be updated in sync with the render cycle to achieve smoother motion.

In addition to the features described above, performance has been improved for high bone count networks. The deformation performance of the sprite network at runtime can be further improved by installing the burst compiler.

Other artist changes: particle updates, sprite packs, and workflow in the editor
Other changes in Unity 2020.1 that are relevant to game artists include an update to the Sprite Packer, which can be used to create a sprite atlas from textures or sprites using the experimental Scripted Importer workflow.

The particle system also has a new free-form stretching mode and a module for the lifespan according to emitter speed, which is "useful for effects such as liquid drops or moving fire".

There are also a number of more general workflow enhancements for the Unity editor, including the option to edit prefabs in the scene view and apply only part of the properties when using presets.

Changes to file import and export include support for custom sketchfab attributes in FBX files, and the option to ignore gamma correction when importing PNG files.

It is only supported in the HDRP and is still officially in the preview. It tiles textures and transfers them to GPU memory only when needed, so much larger textures can be used in a scene.

Other new features: improvements in scripts and profiles, better support for HDR displays
Non-art changes include new performance profiling game options and the ability to extract readable information from the reports Unity saves when creating a project.

In line with Unity's new modular software design philosophy, support for Microsoft's Visual Studio IDE has now been moved from the core engine to a separate package that is currently previewed.

Unity 2020.1 also extends support for HDR displays, both in the editor and in games. and the device simulator that previews the display of a game on mobile phones has been expanded.

The add-on can now be downloaded for free from the Unity Asset Store, even for users with free subscriptions. Here you can read Unity's FAQs on future development plans.

The software is only available on a rental basis: free personal subscriptions have a non-removable welcome screen and can be used by anyone with sales of up to $ 100,000 / year.

Read an overview of the new features in Unity 2020.1 on the Unity Technologies blog

For a complete list of changes in Unity 2020.1, see the online release notes

Greenscreen.blog - September 23, 2020
0
Alt.vfx was announced as one of three Australian recipients of the coveted Grand Prix award at AD STARS 2020 for our work on AA...